Where do the Wizards Go From Here? 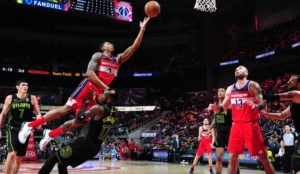 The Wizards announced on Tuesday that star point guard John Wall is undergoing a knee procedure. The procedure will keep him out of games for the next 6-8 weeks. This is a big blow to an already disappointing season by the team’s standards. They currently sit in 5th place, 1 game off the pace of division-leading Heat. 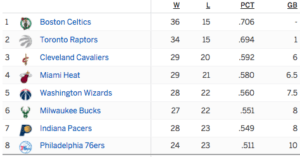 The Wizards have been without Wall for a quarter of the games already this season, and they’ve fared surprisingly well, going 7-6 in those contests, including 2-0 in the two games he’s already missed for this particular knee injury. The remaining schedule shows a staunch difference between the beginning of the season. Opponents through these first 50 games have posted a .486 win percentage, while the remaining scheduled opponents are playing at a .576 clip. 538 projects Washington to win 16 of their remaining games, exactly half. That finish would mean a 44-38 record which should be good for a playoff spot. in three of the past five years, 44 wins has been at least a top-5 seed in the east, and not once in the past 15 seasons has 44 wins missed the eastern conference playoffs.

This Wizards team has shown the ability to beat anyone, winning on the road against all the teams ahead of them in the standings with the exception of the Cavaliers. The timeframe for John Wall’s injury means he’s scheduled to return at least a week and a half before the playoffs. They’ll get into the playoffs and be at full strength, the only question is their opponent. Don’t give up on this team, they’ve shown resilience.