Nathan Walker played 40 games with the AHL’s Hershey Bears, where he scored nine goals and 13 assists. None of his points were bigger then the one Walker got on Monday night in the game six clinching game against the Pittsburgh Penguins. Walker wrapped around the back of the net passing the puck to Alex Chiasson. Chiasson would bury the puck into the back of the net giving the Capitals a 1-0 lead. 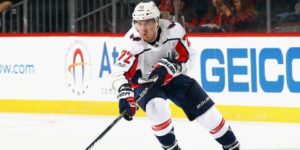 #Capitals coaching staff has to get major props for tonight’s game plan and having the sack to play these 5 rookies tonight. Great leadership from Ovi for having his guys stick with it without Backstrom pic.twitter.com/VdwWGoqssK