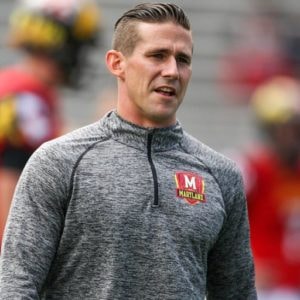 Maryland offensive coordinator Walt Bell is leaving the Terrapins for Florida State.  Bell is expected to be hired for the same position with the Seminoles.

Bell was one of D.J. Durkin’s first hires when he took over the Terps back in 2015.  Even though Maryland is one of the best overall programs in the nation, Florida State is a big upgrade for Bell, football wise.  Bell will join Willie Taggart’s team, who replaced Jimbo Fisher after Fisher left for Texas A&M.

Bell was a high-energy coach who ran an up-tempo offense for the Terps.  He previously coached at Arkansas State, North Carolina and Oklahoma State before joining Durkin and the Maryland program.  Bell did extremely well leading the Terrapin offense in his time.  Of course, Bell dealt with injured quarterbacks and more injured quarterbacks.  However, he still helped set a Maryland record, scoring 173 points in the first four games of the 2016 season and averaged the most touchdowns and fewest turnovers than any other offensive coordinator in Maryland history.  More yards per play and more first downs as well.  Bell was well on his way to doing even bigger things in 2017, scoring 51 points in the upset against #23 Texas in the first game of the year, before Tyrell Pigrome and Kasim Hill went down with season ending injuries.

Durkin announced yesterday that Chuck Heater and Bryan Stinespring have joined the coaching staff.  Heater will become the safeties coach and Stinespring will replace Bowen as offensive line coach.  Durkin is still looking for a replacement as offensive coordinator, but has not decided whether to select someone from his own system, or go out and find a replacement.  Durkin seems to be in no rush, but should look to find someone soon to get on the same page with his potential high-powered offense, as soon as possible.  Not another Mark Turgeon situation.