WrestleMania was five and half hours long with an additional two hour kickoff show that featured two Battle Royals and two title matches. With that said this article will cover the kickoff show that put us all in a New York state of mind wondering why Billy Joel didn’t sing us into action.

Cruiserweight Championship -Tony Nese vs. Buddy Murphy (c)
WWE kicked it off with a Cruiserweight title match as Nese and Murphy brought a blend of their high flying aerial attack and some fist to the fave fighting to launch Mania off with a bang. Moonsaults and 450’s, corkscrews and acrobatic prowess set the tone in this fast paced high octane flurry. Murphy looked the part of champion and appeared to have the match won on a couple of occasions. Nese rallied with a big German suplex into the corner and exploded with a running knee that flipped the switch on Murphy for the pin and win.
Winner: Tony Nese -New Cruiserweight Champion 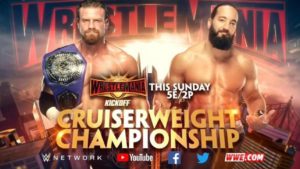 Women’s Battle Royal
X-Pac dubbed it the “Chyna Memorial Battle Royal” Hell I like that and think they should have ran with that idea. Ember Moon made her in ring return and looked good. Moon eliminated Naomi, Ember also hit the “Eclipse” (formerly known as the “O Face” when I was booking her) on Mandy Rose. Asuka and Sonya Deville looked good as expected. Riott Squad got some shine and it was great to see that. No Lacey Evans was a disappointment but I guess if “The Lady” of WWE wasn’t set to win it they didn’t want her in it. Nikki Cross got next to nothing and that is sad she has a helluva gimmick and could be used better. Logan appeared to have the match won when Carmella slipped back into the ring from hiding and stole a victory. Once again Mella is money honey.
Winner: Carmella 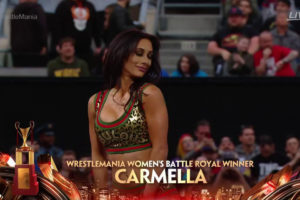 Andre the Giant Memorial Battle Royal
Luke Harper made his long awaited return to the ring and looked good. Braun Strowman was in the best shape of his career and looked like a monster among men, Colin Jost and Michael Che had absolutely no business in the ring but WWE creative keep them out of sight and out of mind and made it work. Andrade and the Hardy Boys looked very good as expected. EC3 once again got treated like a no talent stepchild, I don’t know why they don’t just release him and let the kid go where he would be appreciated. Down to just Strowman and the Hardy brothers Che and Jost made a return to the ring. Braun eliminated the Hardy’s then punched Che off the apron and looked to Jost. Hoisting him high in the air Braun let him fly sending him over the top rope and down upon a group of WWE stars on the floor.. Spot was humorous but I still didn’t need those asshats in the Battle Royal.
Winner: Braun Strowman 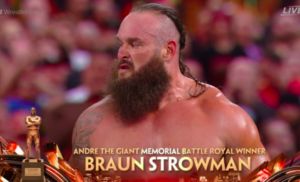 Raw Tag Team Championship — Zack Ryder & Curt Hawkins vs The Revival
This was an interesting addition to Mania late in the process. Hawkins went into this match 0-269 with more losses than the Cleveland Browns in the last 20 years. Ryder had just got engaged to NXT rising star Chelsea Green a talented and absolutely beautiful Woman. What the hell was going on? Clearly “The Revival” was going to sweep in and win easy right? *Swerve Alert* you don;t send guys that are 0-269 into Mania to loose. While Ryder out kicked his coverage with Green in New York Hawkins was looking to do the same at Met Life Stadium. Dawson and Wilder were giving them an old fashioned beat down when out of nowhere Hawkins rolled Dawson up and held on for the pin and the win. Hawkins streak was broken and there were new RAW tag team champions.
Winner: Zack Ryder & Curt Hawkins New RAW Tag Team Champions 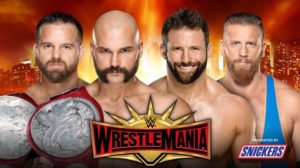 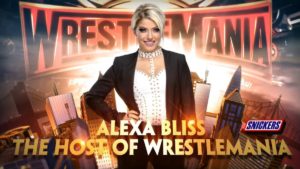