What A Rush, GSP Taps Out On Top

Georges St-Pierre say’s goodbye after a stellar UFC career. There were no tears or remorse in his voice. Appreciation and a sense of gratefulness echoed in his press conference. GSP considered by many to be one of the best to ever step into the cage seemed genuinely happy. Home in Canada it just seemed to be the right place, the right time and the right way to tap out on top.

“There’s no tears. I’m very happy to do it,” St-Pierre said. “In combat sports you should retire on top, that’s what I’m going to do. I’m happy I have the discipline to do it.” GSP added. 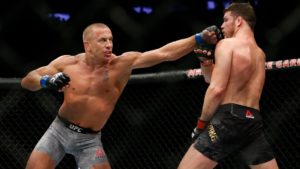 Pierre leaves behind a phenomenal record of 26-2 and is one of only four fighters to win the Title in multiple weight classes. Loses were few and far between as the record indicates. GSP started his pro career 7-0 before a loss to Matt Hughes for the vacant UFC Welterweight title. Rebounding to rattle off 6 straight wins including UFC icon BJ Penn and a ruthless rematch with Hughes to win the UFC welterweight title. Pierre’s first title defense was against Matt Serra who stunned the world with a first round TKO to take the title from the grasp of GSP. 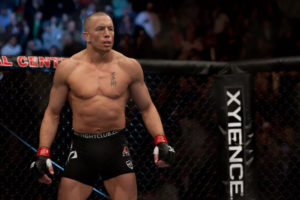 Pierre has not lost since that fateful day in 2007. GSP has gone on a 13 fight win streak even through retirement and a long lay off. Winning the rubber match with Hughes for the interim welterweight title GSP went on a tear. Defeating Serra to unify the title in their rematch via TKO in what many remember as on of GSP’s greatest moments. Blowing through the welterweight division with notable wins over Thiago Alves, Josh Koscheck and BJ Penn. 2013 was a big year defeating Nick Diaz and Johnny Hendricks. Pierre retired as the UFC welterweight champion in December of 2013 vacating the title he refused to lose. Resurrecting his desire to fight GSP returned in 2017 to fight Michael Bisping for the UFC Middleweight title. Taking down the champ in the third round via rear naked choke GSP cemented his legacy as a two division champion. 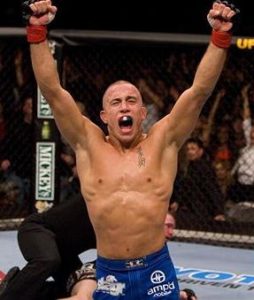 Announcing his intent to retire drew a rapid response from Khabib Nurmagomedov. Khabib coming off a huge win over Conor McGregor clearly wants GSP in the cage before he retires. Pierre seems less than interested in waiting on Khabib to sit out his suspension for a November super fight. What will the future hold? I have no idea but I have learned to never say never fight fans. 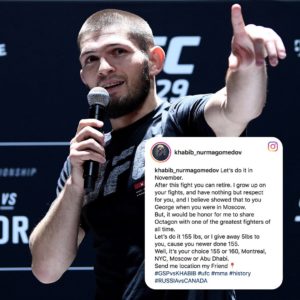 GSP is not only an icon in the cage but a class act outside of it. Always a fan favorite he was humble yet confident, genuine and aggressive in his quest to be the best. Fighters will come and go in the UFC. Some you love and some you love to hate, GSP was hard to hate. His numbers may be matched or even topped one day but his heart and determination insure he will never be forgotten. Fight fans saw one of the best step away today.

To Georges St-Pierre my message is very clear….THANK YOU GSP

Check out a previous feature on Conor McGregor