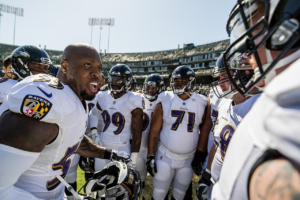 Heading into a week six matchup against the Chicago Bears the Ravens sit at 3-2 and are tied for first place in the AFC North. After there much needed win against the Oakland Raiders the Ravens look to continue the formula that earned them a victory in the “black hole.”

Joe Flacco and the offense were able to move the ball up the field consistently, with a balanced pass-run attack. The Ravens defense made critical stops and held the Raiders’ offensive weapons at bay for most of the game. And the Ravens’ offensive line utterly dominated a rather challenging defensive front.

Torture the Rookie- Rookie quarterback Mitchell Trubisky is expected to make his second career start for the Bears this Sunday. The odds are not in his favor. In the John Harbaugh era the Ravens are a perfect 9-0 against rookie quarterbacks. Earlier this season the Ravens demoralized Cleveland Browns rookie Quarterback DeShone Kizer forcing him to throw three interceptions and lose a fumble. Dean Pees is great at disguising blitzes and confusing rookie quarterbacks of their reads. Trubisky made some quality throws outside the pocket during this past Monday’s game against the Minnesota Vikings. Trubisky moved around in and out of the pocket to extend and make plays. The Ravens’ defense will have to contain Trubisky’s movement and force him to make mistakes.

Earlier this week it was revealed by Pro Football Focus that the Ravens have the fourth best offensive line in the league. In the middle Baltimore is also home to the third ranked center in the NFL in Ryan Jensen. Jensen has received an overall grade of 88.8 through the first five weeks of the season and a run-blocking grade of 86.1, which also ranks third in the league according to Pro Football Focus. Right tackle Austin Howard is also having one of the best seasons of his career earning a run-blocking grade of 87.3, which is first in the NFL among all tackles again according to Pro Football Focus. Howard has also yet to give up a sack this season. The Ravens offensive line absolutely manhandled the Raiders front seven in Sunday’s matchup. The group as a whole did not allow a single sack and only surrendered four quarterback hurries on Flacco’s twenty-six drop backs. The line also opened holes in the run game specifically on the last drive of the fourth quarter where the Ravens ran the ball ten times, including a run call on eight straight plays. Baltimore finished the game with 143 rushing yard and two rushing touchdowns. The Ravens offensive line will need to continue this dominant play in order to replicate the success of the offense they had against Oakland.

Continue to throw the deep ball-

For the first time this season the Ravens took shots down the field. Baltimore literally wasted no time as the first play of the game was a bomb down the sideline to receiver Mike Wallace. The pass went for fifty-two yards and it set a tone for the game. Flacco was finally given the opportunity to show off the cannon he has coming off his right shoulder. Late in the second quarter the Flacco-Wallace connection showed up again as Joe released a rocket down the middle of the field. Wallace ran underneath of it and hauled it in for a fifty-four yard gain, which led to a field goal that made it a fourteen point game. Allowing Flacco to take the top off of secondary’s will open up both the run game and the middle of the field passing game as opposing defenses will have to respect Flacco’s arm.

All signs are pointing to a Ravens win. Baltimore has home field advantage, they are facing a rookie quarterback, and are coming off a huge win on the road. Now it’s just the ability to keep things rolling and protect this house!