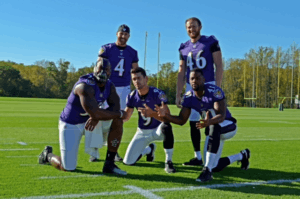 Here we go Ravens fans. Week seven is almost upon us and nobody knows who this Ravens team is. Are they capable of making it to the playoffs? Weeks one, two, and five say yes but, weeks three, four, and six say otherwise. Both the offense and defense have questions marks but, they both also have shown bright spots produced by a variety of players. Heading into a pivotal week seven road matchup against the Minnesota Vikings the Ravens are 3-3 and are in second place in the AFC North. The Ravens need a big road win.

The Ravens’ defense gave up a franchise record 231 rushing yards last week against the Chicago Bears. The Bears’ offensive line had the ability to overpower the Ravens’ front four and create holes wider than the Grand Canyon. Missed tackles also played a big role in Baltimore’s horrid run defense, as it was Jordan Howard’s fifty-three yard run that allowed Chicago to pull out a victory in overtime. Eric Weddle and many other Ravens had the opportunity to bring Howard down in the backfield but, they did not wrap him up. Another reason the Ravens’ usual stout run defense has fallen is because of the absence of defensive tackle Brandon Williams. Since Williams’ last game in week two, the Ravens have surrendered a whopping 678 rushing yards over the four game span. This season the Ravens have the third worst defense against the run, surrendering 141.3 rushing yards a game. Brandon Williams returned to practice earlier this week and that is a great sign. Baltimore needs their elite run stuffer against the Vikings’ eighth ranked rushing attack if they want to have a chance at a victory in hostile territory. If Williams is healthy enough to go and the Ravens can stop the run and make Minnesota’s offense one dimensional, it will allow the pass rush and secondary to force mistakes.

It has been shown that if the Ravens can strike early and give their defense a lead that it is usually a recipe for a victory. In the three Ravens wins this season they have outscored their opponents 38-10 in the first quarter. In losses the Ravens have been outscored 13-0. An early lead obviously allows the defense to play a little looser as they do not have to be perfect and can allow a few mistakes without them being catastrophic to a rather lethargic Baltimore offense. How do the Ravens strike early? You allow quarterback Joe Flacco to let the ball fly. It has been said all week, that a deep passing game improves this offense tremendously. And it was proven between weeks five and six as against the Raiders two passes were completed for fifty plus yards and the Ravens won. Facing the Bears, there were zero passes attempted more than thirty yards and Baltimore lost a heartbreaker. The ball will travel a lot easier inside U.S. Bank Stadium, which is even more reason for offensive coordinator (who I believe is on the hot seat this week) Marty Morhninweg to scheme up the deep ball early and often against Minnesota’s eighteenth ranked passing defense.

A receivers job is pretty simple. Run the given route and catch the ball when open. Now this is easier said than done but these guys are professionals that work on their craft day in and day out. But last week and really the whole season you would not be able to tell if you watched this teams receiving core. The Ravens rank eighth in the NFL with nine dropped passes as a team with third year man Breshad Perriman leading the way with three. Nine may not seem like a lot but if those nine passes are caught there is a possibility that the losses suffered this season could have had different outcomes. Baltimore was without first year Raven Jeremy Maclin last week which only added insult to injury but, that dos not excuse drops from receivers Michael Campanaro, Breshad Perriman, and Chris Moore. Both Perriman’s and Moore’s drops led to interceptions, with Moore’s being taken back for a Bears touchdown. Joe needs to be able to trust his guys on the outside in order to have success. Hopefully the Ravens have their top two receivers healthy Sunday, as both Jeremy Maclin and Mike Wallace were listed on Baltimore’s injury report Wednesday.

The Ravens can earn a huge bode of confidence with a win in a tough road game. Baltimore is going to need all of the confidence they can get as they turn right around and play the Miami Dolphins on Thursday Night football.