UFC Fight Night: Till vs. Masvidal will be held today, March 16, 2019 at The O₂ Arena in London, England. Due to the location of the fight the prelims start at noon central time, 1pm ET. Let’s take a look at the main card and I will give my fight predictions. This is a great card and should be some very entertaining fights today.

Jack “The Hammer” Marshman vs. John “Welsh wrecking machine” Phillips
Marshman 22-8 comes in at 6′ 185 pounds with a 73″ reach. “The Hammer” is coming off 2 losses to Antônio Carlos Júnior and Karl Roberson.and since 2017 is a meager 1-9 in the cage.
Phillips comes in with eerily similar numbers, 21-8 and also coming off back to back loses to Charles Byrd and Kevin Holland. ‘Welsh Wrecking Machine” is 5’ 11″ 185 pounds with a reach of 75″. Neither fighter jumped off the page at me but i will say…
Winner: Jack :The Hammer” Marshman 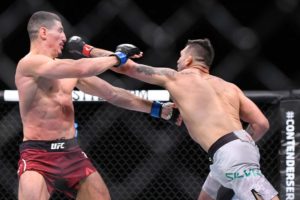 Nathaniel “The Prospect” Wood vs. Jose “El Teco” Alberto Quiñones
Wood is the number 24 ranked bantamweight in the world. With a record of 15-3 “The Prospect” has won 7 straight including wins over Luca Iovine and Andre Ewell . Standing 5’6″ 135 pounds with a 69″ reach. Wood comes in as a moderate favorite.
Quinones tale of the tape reads 5’8″ 135 pounds with a 69″ reach. Coming off 4 straight wins “El Teco” is looking to make a name for himself against Wood and climb the rankings ladder in the division.
Winner: Nathaniel “The Prospect” Wood 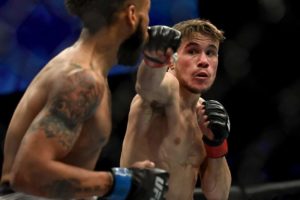 Volkan “No Time” Oezdemir vs. Dominick “The Devastator” Reyes
This is a great match up with two hungry fighters who love to fight,
Oezdemir at 6’2″ 205 pounds sports a reach of 75″ and looks like he was cut from stone. Ranked number 7 in the light heavyweight division he boasts a record of 15-3. Coming off 2 straight losses but before you cringe on that stat understand who he lost to. Volkan lost to Daniel Cormier the heavyweight champion of the world and to Anthony Smith. Clearly the time is now for “No Time”
Reyes 6′ 4″ and 206 pounds has a 77″ reach giving him a slight advantage in that category. Undefeated at 10-0 “The Devastator” is coming off wins over Jared Cannonier and .Ovince St. Preux. Reyes is the favorite but a win by Oezdemir shouldn’t surprise anybody.
Winner: Dominick “The Devastator” Reyes 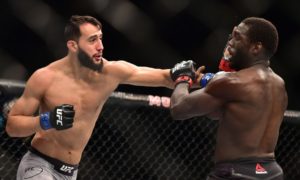 Leon “Rocky” Edwards vs. Gunnar “Gunni” Nelson
Two top 12 welterweights clash in what should be an all out slug fest. Edwards comes in at 6′ 170 pounds with a 74″ reach. Holding a record of 16-3 “Rocky” rides a 4 fight win streak into this fight. Wins over Peter Sobotta and Donald Cerrone leave him one good win away from title talks.
Nelson at 5’11” and 170 pounds gives up 2″ in reach to Edwards. Coming off a loss to Santiago Ponzinibbio Gunnar rebounded to defeat Alex Oliveira to improve his record to 17-3-1. Edwards is a slight favorite in this one. This one should be a fantastic fight and could steal fight of te night if they both let the hands fly.
Winner: Gunnar “Gunni” Nelson

Darren “The Gorilla” Till vs. Jorge “Gamebred” Masvidal
What a main event this should be rounding out a very solid card. Two men who love to scrap and have the tools to do it all.
Masvidal comes in at 32-13 and is the number 11 ranked welterweight in the world. Standing 5’11” and 171 pounds with a reach of 73″. After ahuge win over Donald Cerrone, Masvidal has dropped his last two fights to Demian Maia and Stephen Thompson. Masvidal can shot into title talks with a win but a loss will put him out of the picture.
Till at 6’1″ and 170 pounds has a slight 2″ reach advantage over Jorge. With a record of 17-1-1 “The Gorilla” is coming off his only loss to then world champion Tyron Woodley after defeating both Donald Cerrone and Stephen Thompson. Ranked number 3 in the world a win solidifies his title shot in the near future while a loss puts him outside the box looking in. Till is a moderate favorite but the experience of Masvidal and his willingness to scrap always make him very dangerous.
Winner: Darren “The Gorilla” Till 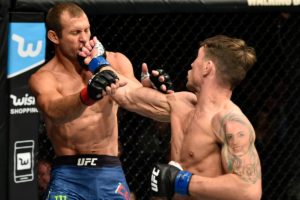 Fantastic card on tap today and the early start time means we don’t have to wait long for the action. Follow the action on Twitter with me on @MSBFightClub