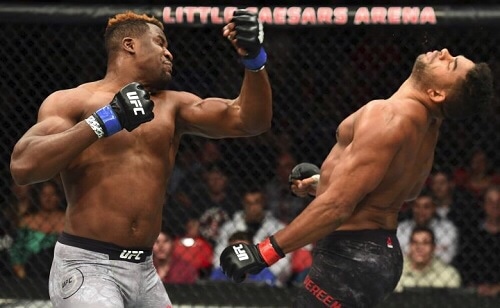 UFC 220 is going to be electric featuring an amazing heavyweight and light heavyweight championships fights. The headline match is Stipe Miocic vs Francis Ngannou.

This fight is one of the most unusually fights betting wise because the contender Ngannou is the favorite going into the fight with -170 odds. Ngannou is coming off knockout of the year awards after knocking out Allistair Overeem in UFC 218.

Ngannou has been electric since joining the UFC in 2015. Ngannou is 6-0 in the UFC with four knockouts. Ngannou also became famous on social media after the UFC released a video from the UFC’s performance institute showing the true power from Ngannou’s punches breaking a world record for hardest punch recorded with 129,161 units.

The video was similar to Ivan Drago video in Rocky, and Ngannou even punched harder than Drago in the Rocky 4.

Miocic is trying to break a heavyweight record by defending his belt four times in a row, and has great wrestling ability making this a potential fight of the year.

The co-main event is going to be a great match that is getting overlooked by the main event with Daniel Cormier vs Volkan Oezdemir. Cormier is one of the UFC best fighters ever and the former Olympian is has a tough matchup against a kickboxer from Switzerland.

Oezdemir has only fought three times in the UFC and has won every fight, but the veteran Cormier looks like the favorite with -313 odds. Cormier has great punching power power, and is a former greco Roman Olympian wrestler who will use his wrestling skill against the new comer.

The other main card fights are