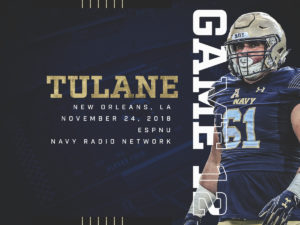 The Navy Midshipmen lost to the Tulane Green Wave, 29-28, Saturday afternoon in a heartbreaker in New Orleans. Navy falls to 3-9 on the season. Tulane moves to 6-6 and becomes bowl eligible.

After trailing Tulane by 21-3 at halftime, the Midshipmen came out strong in the third quarter scoring 18 unanswered points to tie the game. After briefly taking the lead in the fourth quarter, the Navy defense couldn’t stop the Green Wave from answering with a touchdown and a two-point conversion. The one-point lead would be enough to secure Tulane the win.

For the first time in a year, Navy recorded over 200 yards passing. Zach Abey started off slow in the air but found his rhythm, and the Navy receivers, in the second half. Abey finished the day with 167 yards passing. Malcolm Perry got in on the passing game as well, tossing it to Abey for a 37-yard touchdown in the third quarter.

Darnell Mooney led Tulane in receiving with 135 yards. Darius Bradwell had 66 yards rushing to lead the Green Wave on the ground. At quarterback, Justin McMillan tallied 291 yards in the air and 51 yards rushing.

Here’s a look at how the teams matched up in the game’s final numbers.

Up next for Navy will be Army on Dec. 8 in Philadelphia. Although the Mids went home with a loss, their second half play in New Orleans should be a huge boost going into their final, and biggest, game of the year.