The Top Ten Tag Teams of All Time

Tag team wrestling has long been a staple of professional wrestling. Often times wrestlers break in as members of tag teams and go on to have wildly successful singles careers, others spend their entire careers as a part of a tag team. Without further ado, here is MSB Fight Club’s top ten tag teams of all time!

The team of Ax and Smash was considered by some to be one of the best tag teams of the 1980’s and 90’s. The team debuted as heels in 1987 , and began to gain notoriety for literally running through their opponents. The group was at its height when the tag team division was beginning to load up on talent, which makes their title reigns all that more impressive. Demolition has the second longest reign with the world tag team titles at 470 days, and ran through great teams such as The Hart Foundation, The Rockers, and The British Bulldogs to win 3 tag team titles during their time with the WWF. 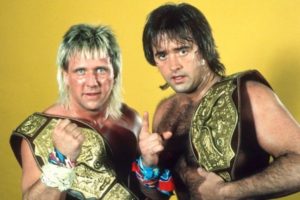 The Rock ‘n’ Roll Express debuted in the early 1980’s, when the team wrestled in Memphis and Mid-South Wrestling to gain their footing. Following their short stint, they moved to NWA also known as Jim Crockett Promotions, where the team won the NWA tag titles 8 times. Robert Gibson and Ricky Morton made up one of the most successful tag teams of the talent rich 1980’s. Though the team was undersized, the Express regularly used their speed and athleticism to work their way up the ladder of tag team wrestling. The Rock ‘n Roll Express paved the way for tag teams like them, including the likes of The Hardy Boyz, Los Guerreros, and London & Kendrick. The team was inducted into the WWE Hall of Fame in 2017. 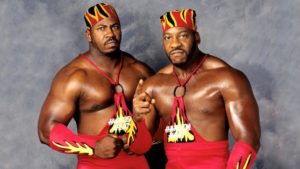 One of the most prolific tag teams of the 1990’s, Harlem Heat dominated WCW’s tag team division along with The Steiner Brothers. The team, made up of real-life brothers Booker T and Stevie Ray, used their athleticism and strength on their way to capturing the WCW Tag Team Titles 10 times. Facing the likes of The Steiner Brothers, The Outsiders and Public Enemy, Harlem Heat cemented themselves as one of the premier tag teams of all time.

When someone mentions the Dudley Boyz it’s hard to not think of Bubba Ray yelling “get the tables” at Brother D-Von. The fan favorites made appearances on ECW, TNA, and the WWEbringing hardcore to the tag team division. They are the only tag team that has held the tag titles in all three promotions, as well as the NWA and IWGP tag titles. The team, along with the Hardy Boyz and Edge and Christian, helped to usher in the Ruthless Aggression Era with three of the best TLC matches anyone will ever see. Always entertaining, and always fan favorites, Team 3-D was inducted into the WWE Hall of Fame in 2018. 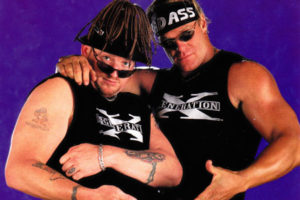 Ladies and gentlemen, boys and girls, children of all ages, MSB Fight Club proudly brings to you, the number six tag team in the wooorrllddd, the Road Dogg Jesse James, the Badd Ass Billy Gunn, the New Age Outlaws! The team of Road Dogg and BA Billy Gunn was THE tag team of the Attitude Era as a part of the D-Generation X stable. Formed in 1997, the Outlaws won the tag titles soon after when they defeated all time legendary tag team legends the Legion of Doom. The six-time tag team champions inspired fans in the 1990’s and gained notoriety for their entrance and mic skills, as well as their brash style in and out of the ring.

The Steiner Brothers, also known as the best tag team that WCW ever saw, won over the hearts of many wrestling fans not long after their debut in 1989. Made up of real-life brothers Scott and Rick Steiner, the tag team won the WCW/NWA tag titles on 7 different occasions, and winning the WWF tag titles twice. Their matches with another perennial powerhouse Harlem Heat would keep the WCW tag team division afloat despite a fall off in talent in the mid to late 1990’s. There is often an argument as to which team was the better, but one thing everyone can agree on is the impressive fashion in which the two teams competed. 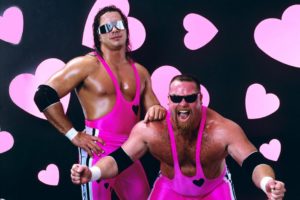 The original incarnation of the Hart Foundation saw Bret ‘The Hitman’ Hart team with brother-in-law Jim ‘The Anvil’ Neidhart. The team debuted in 1985 in the WWF and faced the likes of The British Bulldogs, The Rockers, and Demolition over their 6 years as a tag team. Though the team only held the tag titles on two occasions, they helped bridge the gap between the high talent 1980’s and the lesser talented early 90’s in tag team wrestling. The team vaulted Bret Hart into superstardom as a singles wrestler and cemented themselves into the conversation among best tag teams of all time. 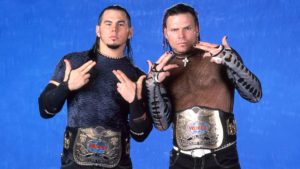 The Hardy Boyz come in at number 3 because of their influential impact in the late 1990’s early 2000’s and their continued success. The team of real-life brothers Jeff and Matt Hardy, the Hardy Boyz were also nicknamed Team Xtreme for their unreal high-flying moves and their willingness to lay their bodies on the line. They helped to usher in an era of ladder and table matches that were unlike what most wrestling fans were used to seeing. The team won six tag team titles in WWF/WWE, along with the Raw, WCW, TNA, and ROH tag team titles making them the first team to ever hold all of those titles. The team is the only one on the list whose members are still actively wrestling today, both in the WWE. 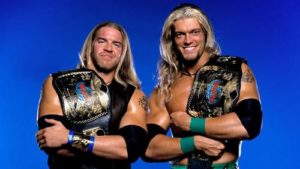 ‘Now for the benefit of those with flash photography,’ MSB fight Club presents our number two tag team of all time. The team emerged from in the heart of the Attitude Era in 1998 as a part of The Brood with Gangrel. The teams first tag team titles came at Wrestlemania 16 (2000) when they defeated the Hardy Boyz and The Dudley Boyz in a triangle ladder match. The team dominated the tag team division during their short 3 years as a team, winning the tag team titles on 7 separate occasions, and being held by many as one of the greatest tag teams to ever wrestle in the WWF/WWE. 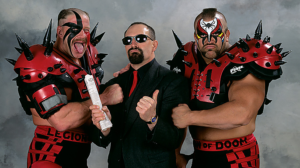 OOOOHHHH WHAT A RUSH! The Legion of Doom, made up of Road Warrior Hawk and Road Warrior Animal, is rightly considered by many wrestling fans as the greatest tag team to ever grace the squared circle. The team won the NWA, AWA, and WWF tag team titles, becoming the only team to win the tag titles in all 3 of the biggest wrestling promotions of the 1980’s. The team spanned two generations of tag team wrestling, facing teams like The Rockers, The Fabulous Freebirds, New Age Outlaws, and Money, Inc. The team was inducted into the WWE Hall of Fame in 2011.

Avid sports fan. Been a fan of WWE since I was 3 years old. Bachelors degree from Alvernia University.