Today, Washington Capitals forward Tom Wilson represented by the NHL Players’ Association, formally filed an appeal with the NHL’s Department of Players Safety who ruled on Wednesday a 20-game suspension. This was the Department of Safety ruling after Tom Wilson showed to an in person hearing in New York on Wednesday morning for “illegally” checking the head of St. Louis Blues forward Oskar Sundqvist.

People were shocked by the outrageous amount of games that Wilson got suspended for. Is the Department of Safety trying to make an example out of Wilson?

In the video released by the Department of Safety explaining their determination, they explained that Sundqvist’s head was the main of contact and it was avoidable by Wilson finding him responsible of an illegal check. Then, they proceed to explain the determination of the length of the suspension. They make reference to a very vague and open clause from the Collective Bargaining Agreement, which basically let’s the decision to be at the discretion of the Department of Safety:

“Players who repeatedly violate league playing rules will be more severely punish for each new violation.”

They mention that it has only been 16 games since the last suspension and that all the requirements for a hard punishment were met:

Wilson filed the appeal within the 48 hours required from the ruling of the Commissioner. If Wilson doesn’t agree with the NHL Commissioner Gary Bettman decision after the appeal, who is well known to have a hard hand and confirm his first rulings, he can appeal to a neutral arbitrator. Wilson will remain suspended through the appeal process. 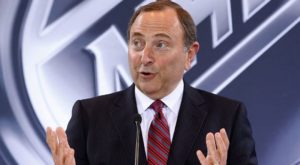