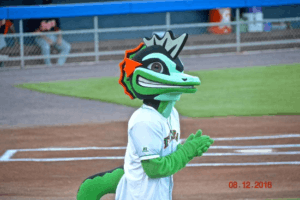 This was the eighth time, out of 21 scheduled games, that these teams have met already in 2018.  Overall series is tied 4-4.

Yacabonis pitched five innings, giving up three hits, one earned run.  He walked only one batter but struck out a season-high six as he won his first game of the season (1-1) for the Tides.  Knights’ (17-27) starter TJ House took the loss (1-6), only pitching two innings, giving up sevens hits and seven runs (though only one of those runs were earned).

Every starter in the Tides’ line-up had at least one hit as they pounded out 15 total hits, including two doubles, two triples and two home runs.  They made House work from the start of the game, making him throw 20 pitches to get through the top of the first as he gave up a single and a walk.

C Caleb Joseph began the top of the second by reaching base due to SS Juan Perez’s fielding error and it proved to be a costly error.  Wynns followed that up with a single on a line drive to right and 1B Garabez Rosa then doubled to center, scoring Joseph and moving Wynns over to third.

2B Ruben Tejada was unable to bring in either runner as he grounded out to third base for the first out.  SS Adrian Marin would also hit a ground ball to third base, but it was hit soft enough to score Wynns for the third run of the inning and moved Rosa over to third.

A two-out mound visit proved to not be futile as LF Mike Yastrzemski hit a 2-0 fastball over the center field wall for his first home run with Norfolk and extending the lead to 5-0.

3B Renato Nunez followed the home run with a triple of his own and then he scored on RF DJ Stewart’s RBI-double.  After Joseph batted for the second time in the inning, grounding out to SS, Norfolk had one of their best innings of the season, scoring six runs.

Norfolk would add another run in the top of the third on Marin’s two-out RBI single.

Charlotte finally got on the scoreboard when 1B Matt Skole hit his 4th HR of the season (a two-out solo shot) off Yacabonis.

The Tides got that run back in the top of the fifth with Wynn’s lead-off solo HR (3rd of the season) to left field.

RP Paul Fry replaced Yacabonis in the sixth and had a scoreless frame, but Skole led off the bottom of the seventh by hitting his second solo HR of the game.  Two batters later, Perez hit another Knights’ solo HR (his 3rd) and the lead was down to 8-3.

Norfolk scored their ninth run in the top of the ninth on Tejada’s two-out RBI single.

Wednesday night’s third game (of four) in the series see Norfolk’s Tim Melville (5-1, 3.54 ERA) looking to avenge his only loss of the season in his previous start.  His pitching opponent for Charlotte is Michael Kopech (1-2, 4.02 ERA).  First pitch is slated for 7:04 PM.