Terps in the NBA 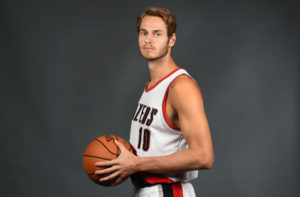 There are four former Terrapins in the NBA for this upcoming season.  Center Diamond Stone, guard Melo Trimble, forward Jake Layman, and F/C Alex Len.  Greivis Vasquez is no longer on an NBA roster and will likely play overseas.  Vasquez last played for the Brooklyn Nets in 2016 and has not signed a contract to play in 2017-18.  Of course Terp fans remember Vasquez, known for the shimmy-shake after a big three, has his jersey retired among other Terrapin legends who put on the uniform.  Vasquez graduated in 2009-10 and is second all time in scoring.

Melo Trimble is the most recent Terrapin to sign an NBA contract, but is not listed on the Timberwolves roster.  Trimble will most likely start out the season in the D-League and make his NBA debut at a later date.  Alex Len rotated as a starter and bench player for the Phoenix Suns since being drafted #5 overall in the 2013 NBA Draft. Len has also not yet signed a contract for the upcoming season, but Len will probably accept the Suns qualifying offer keeping him in Phoenix.

Diamond Stone has recently signed a contract with the Chicago Bulls and is listed on the roster.  Stone was drafted in the second round, 40th overall in the 2016 draft to the New Orleans Pelicans.  Stone was then traded to the LA Clippers where he split time in the D-League and pros.  Stone was the starting center for the Terrapins in the Sweet 16 run of 2015-16.

Another player on that team was wing Jake Layman.  Layman was also taken in the second round of 2016 at 47th overall to the Orlando Magic.  Layman was traded to the Portland Trail Blazers where he played his rookie season as a third string forward.  Layman is a stretch-4, standing at 6’9 and giving him the prototypical “NBA body”.  He also shined in the summer league and will look to be more involved in Portland’s offense this season.

Three Terps from the 2015-16 Sweet 16 run are in the NBA and will look to lead good careers.  Trimble, Stone, and Len all left school early to enter the draft and Layman got drafted after graduating in 2016.  While Len and Layman look to become more involved in the team wins, Trimble and Stone look to get their careers off with a bang and make a name for themselves.