Terps Hope to Bounce Back Against Minnesota 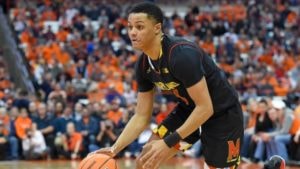 Maryland is back at home after suffering a heartbreaking loss on the road against #23 Michigan on Monday.  The Terps lost 67-68 after two free throws with 1.2 seconds remaining.  The Terrapins took a one point lead on a three by Kevin Huerter capping an impressive late-game comback.  It was a rough loss, but the short-handed Terps proved when they play with heart, they can stick with some of the top teams in the nation.

Minnesota has fallen off the table a bit, but is still dangerous.  Earlier in the season, the Golden Gophers found themselves at #12 in the top 25.  Currently, they have dropped out of top 25 and sits at 2-3 on the road this season.  They have dealt with many injuries, just like the Terrapins.  Reggie Lynch is the big name who went down, leaving the 6’8 Jordan Murphy as the lone productive ‘big’ man.

Minnesota & Maryland both have identical records, both sitting at 14-6 and 3-4 in the Big Ten.  The Golden Gophers are led by junior forward Jordan Murphy, posting 18.1 points per game.  They have four other players averaging double figures on the year, including Nate Mason, Amir Coffey, Dupree McBrayer and Reggie Lynch.  (15.7, 14.1, 10.4, 10.1 respectively).  Murhpy also leads the nation with 18 double-doubles.

Kevin Huerter looks to find his shot earlier on in this one.  Huerter finished with 12 on 4-11 shooting in the Michigan game, but wasn’t doing much in the first half.  Anthony Cowan Jr. led the Terps in scoring again with 24, making it the 13th time he’s been the top scorer for Maryland this season.  Bruno Fernando also struggled heavily and the Terrapins are going to need him to produce.

Maryland was without Dion Wiley, suffering from a concussion, on top of the loss of Justin Jackson and Ivan Bender.  Maryland walk-on Reese Mona found himself in the game due to the fact Mark Turgeon had no one else to turn to.  There is no update on Wiley’s status for tonight’s game, but it looks like he will sit out again.  Physical injuries are not the only problem the Terps are facing right now either. Many players, including Fernando and Turgeon himself, are suffering with the flu.  Hopefully everyone is getting healthier by the minute and can play at their full potential.

This, like the Penn State game, is a must-win for Maryland to help support their cause to go dancing in March.  Minnesota is in a slump, but is still a solid team.  This win would not only get the Terps back in the win column, Joe Angel style, but prove that they can still win the games they’re supposed to win.