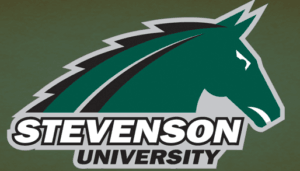 were honored before the match in front of 147 fans at Owings Mills Gym and then the team went out and defeated Alvernia, three sets to none, to win their 16th consecutive match.

In the American Volleyball Coaches Association (AVCA) Division III poll released earlier today, Stevenson jumped six spots in the top 25 (the biggest mover within the poll).  Stevenson has not lost a match since a three sets to one loss at Carnegie Mellon back on September 16th.  During the current match-winning streak, the Mustangs have defeated two top 25 teams (10/7 against then-ranked #21 Juanita and a huge 10/19 win over then-ranked #16 Johns Hopkins).

Golden Wolves Senior OH Kristen Sipling had a match-high 16 kills in the loss.

Alvernia kept it close during the first eight points in the first set, playing Stevenson to a 4-4 tie.  Going on a 9-3 run, Stevenson had back to back kills by Sophomore OH Katie Leftridge, and a service ace by Sophomore S Julie Nightwine before Alvernia could get a point from a kill by Junior S Abby O’Donnell.  Four more Mustangs killed, sandwiched between two Golden Wolves attack errors and Alvernia had to call a time-out down 13-7.

The Mustangs would not give the Golden Wolves any chances to build momentum and finished off the first set on a kill by Leftridge, taking the set, 25-15 and a one set to none lead.

Stevenson started the second set hot by winning the first three points but then they would have un-characteristic errors that allowed Alvernia to eventually tie the set at 4-4.  But, as in the first set, the Mustangs would go on 11-4 run before the Golden Wolves would call their first time out of the set with Stevenson leading 15-8.  The time out seemed to re-energize Alvernia as they would go on a mini 9-6 run of their own, calling their second and final time out of the set, trailing 21-17.  A kill by Golden Wolves Junior RS Laura Wachowicz closed the Mustangs lead to 21-18, but that is as close as they would get as Stevenson ended the second set on a 4-1 and took it, 25-19 on a kill by Sophomore MH Victoria Prokic.

Alvernia would have it’s first lead since leading 4-3 to open the match, when Wachowicz’s kill made it 5-4 Golden Wolves.  They would play the Mustangs tough for the next few points and it was tied 6-6 before Stevenson had a mini 3-0 run to take the lead for good 9-6 on a service ace by DS Megan Hren.  After being denied on their first match point by a Sipling Golden Wolves kill, the Mustangs won the match on the very next point as an attack error by Alvernia Senior M McKenna Achenbach went into the net and Stevenson won the third set, 25-18 and the match three sets to none.

There are two non-conference matches left on the regular season schedule for the Mustangs.  They’ll go for their 17-consecutive match win Thursday night at home against the Franklin & Marshall Diplomats (16-9) before travelling to Radnor, PA to take on the Cabrini Cavaliers (24-5) on Saturday afternoon.

In the upcoming 2017 MAC Women’s Volleyball Tournament that begins October 30th, Stevenson has already locked up the #1 seed.