Maryland’s offense runs through two Juniors, running back Ty Johnson and wide out DJ Moore.  With Kasim Hill taking over as starting QB, he has a number one receiver to target.  When he isn’t dropping back to pass, he can hand the ball off to his other deadly weapon in Johnson to rely on some solid yardage.  These guys really take the pressure off of the Freshman and allow him to make plays.  That’s what the Terrapin offense will consist of this season, and so far they have gotten the job done.

Moore has solidified himself as the number one target for Hill.  Alongside Taivon Jacobs, Maryland’s recievers are nothing to mess with.  Moore has 23 consecutive starts for the Terps, dating back to 2015 making him tops among all offensive starters.   Moore tied a Terps record for most touchdown catches in his first two seasons (9) with current Vikings star Stefon Diggs, former Ravens WR Jermaine Lewis, and former college star, Dan Bungori.  Moore led the Terps in receiving yards with 637, TD’s with 6, and yards per catch with 15.5 as a Sophomore in 2016.  Moore also led the Big Ten among all players averaging 15.3 yards per play.  He was not only a WR, but he also led the team with 15 kick returns for 334 yards.  Moore tied another Maryland record with a 92-yard TD at Nebraska, tying him for the second longest TD in school history.  In Moore’s Freshman campaign, he tied for the team lead in TD receptions with 3 and ranked second in yards and catches.  Moore played in all 12 games, starting in the final 10.

Ty Johnson has been electric to watch in his career.  In his Sophomore season, Johnson rushed for 1,004 yards, becoming the Terps ninth player in school history to accomplish this.  Johnson also broke a Maryland record with 9.1 yards per carry.  He led the team in what seems to be every offensive category.  All-purpose yards (1,249), rushing TD’s (6), and of course yards/carry and total rushing yards.  Johnson was named 2017 Doak Walker Award Watch List, 2017 CFPA Performer of the Year Watch List, and 2017 Athlon Sports Third Team Preseason All-Big Ten.

Moore and Johnson haven’t missed a beat to start this season either.  Moore scored three TD’s against Towson on 7 receptions for 97 yards.  He also ran one in as well.  At #23 Texas, Moore racked up another 7 receptions, this time for 133 yards and a TD.  Johnson added 12 rushes for 132 yards and a TD in that upset win as well.  Against the Tigers, Johnson exploded for only 5 rushes but for 124 yards and 2 TD’s in the blowout victory.

With Maryland in need of stars, Ty Johnson and DJ Moore are solidifying themselves as the “Go-To Guys” in Maryland’s offense.  As the Terps get set to take on UCF in their next contest, it is only right to assume the Juniors will do it again.  It is safe to say that without Johnson and Moore, the Terrapins would not find themselves at 2-0. 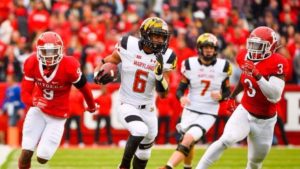