On June 1, 2018, I became a Chestertown, MD resident. Upon entering the quaint Kent County town, there stands a bronze statue of William “Swish” Nicholson, a former Major Leaguer who was born and raised here. Then, the Deputy Director of the Kent County Historical Society Amanda Tuttle-Smith gave me an Eastern Shore Baseball book as a “welcome gift” (my friends really do know the key to my heart). Historical Society Board Member David Durfee happens to be a sports wizard, and has started to tell me the rich history of lacrosse in the area.

I was meant to move here.

Utilizing the Historical Society library, I skimmed across a black and white photo of lacrosse players, with a man in uniform behind him. Being a huge Navy Atheltics fan, I knew exactly what I had stumbled upon. If there is anything that I have learned from working in college sports for the past eight years, is the history of one person or team, “like most histories, linked to more history ‘by a series of serendipitous handshakes'” (Robert Day, “Pitching: A Writers Guide To The Baseball Greats”, Washington College Magainze, Summer 1996). 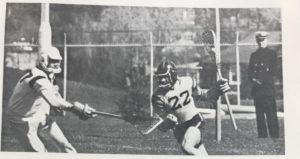 Kelly has a rich history. Born in 1912 in Baltimore, he grew up to be named in three different Hall of Fames; Johns Hopkins University class of 1995, Washington College class of 1985, and US Lacrosse class of 1966 (the same year he was named Coach of the Year).

During his years as a student-athlete as a Johns Hopkins Blue Jay, he played three sports; lacrosse, basketball, and football. It was in his sophomore year that the Blue Jays went to Los Angeles, CA to represent Team USA in the 1932 Olympics. (At this time [including 1928, and 1948], lacrosse was only demonstrated. Olympic years 1904 and 1908 were the only years for lacrosse to be an actual sport.)

Upon graduating JHU in 1934, he founded the Baltimore Athletic Club so he, friends, and former teammates, could continue to play lacrosse. The efforts paid off as Kelly was was selected to represent Team America in the 1937 Flannery Cup in London, England. America swept the competition, winning all seven games.

His years in between 1937 and 1957 is when ‘life happened’. He married, he coached his alma mater Friends School, worked in an aircraft factory, and then moved from Baltimore to Chestertown when he got a job with General Motors in 1952. He ended up owning his own car dealership, Don Kelly Chevrolet and Buick in Chestertown.

In 1957, the opportunity to coach lacrosse at Washington College was available, and he took it. He spent 21 seasons with the Shoremen, with a final record of 161-91-1. A few colleges that they played against throughout the years were University of Virginia, Brown University, Loyola University (Maryland), his alma mater Johns Hopkins, Towson University, the Naval Academy, Washington and Lee University, and Army- West Point.

Near the end of his career, “in 1976, he sprung the upset of the year ambushing [reigning] national champions Johns Hopkins University” (in Kelly’s Washington College HOF profile). He had more accomplishments than that at Washington College as “the lacrosse teams developed under coaches Charles B Clark and Don Kelly, were usually among the leading squads in the nation each year, thus spreading the reputation of the college nationwide” (Fred Dumschott, “Washington College”, page 258).

Kelly was a small-town hero for Chestertown; brought recognition to the college, a small business owner, took on the roles as a husband and father, and ultimately became a lacrosse legacy for me to discover. 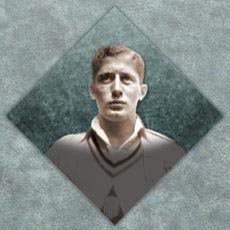