The Baltimore Ravens lost to the Cincinnati Bengals 34 to 23 in a game in which the Ravens were down early.  The Ravens closed in on a comeback but fell short after a Joe Flacco fumble.

Quarterbacks:  Joe Flacco and Lamar Jackson but played in this game but Flacco saw almost all the snaps at qb.  Flacco started off the game with an interception but played well for the most part.  Flacco was under pressure for most of the game and still made some big plays.  Flacco completed 32 out of his 55 passes for two touchdowns and two interceptions.  Flacco’s arm was hit on his second interception and he finished with just a 76 qb rating.  Flacco also had several first down’s with his legs.  Flacco threw for 376 yards and it still was not enough.  Grade C+

Running backs:  The running backs all together only rushed for 66 yards on 22 attempts.  Buck Allen scored a big touchdown.  The running game was not used much because the Ravens were trailing almost all of the game.  Alex Collins made some big plays but most of them were in the passing game.  Grade B

Receivers:  John Brown lead the Ravens with four receptions for 92 yards and a touchdown.  Brown also dropped a few balls that could have been caught.  Michael Crabtree had a good game with five catches for 56 yards.  Willie Snead had five receptions as well.  Nick Boyle had several penalties that pushed the Ravens back.  Rookie Mark Andrews had a big touchdown for the first in his career and three other receptions.  The receivers needed more separation but they were not the issue.  Grade B

Overall:  The Ravens need to improve their offensive line play but the offense was not the biggest problem.  Grade B

Linebackers:  C.J. Mosley left early in the game with a knee injury and for the first half the Ravens looked confused and Terrell Suggs admitted they were.  Kenny Young played well in place of Mosley but the communication was the issue.  Young had eight tackles, and Patrick Onwuasor also had eight tackles.  The coverage on the tight ends was questionable on some big plays.  Grade C

Secondary:  Even when the Ravens had good coverage the Bengals made plays.  The Ravens had decent coverage on some plays but A.J. Green straight up burned them.  The Ravens allowed Green to have three touchdowns in the first half.  The Ravens secondary allowed four touchdowns and had zero interceptions.  This unit is too good to play like this.  Grade D 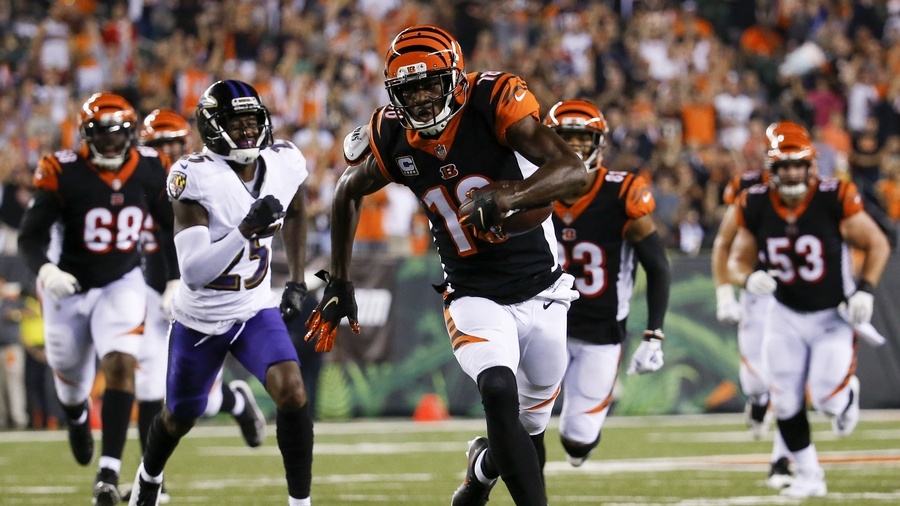 Overall Defense:  The Ravens defense could not stop the Bengals in the first half and was the doom for the Ravens.  Grade D

Special Teams:  Janarion Grant fumbled on a return but it was recovered, the Ravens have concerns with his hands.  Justin Tucker was perfect on kicks and Sam Koch did his thing.  Grade B+

Coaching staff: The Ravens were not ready to play this game.  Thursday Night Football games are extremely tough on the Ravens.  The Ravens coaching staff adjusted well in the second half but it was too late.  Grade D

Final Thoughts:  The Ravens were not prepared to play on the short week on the road.  The Ravens have a tough schedule ahead of them.  This felt like a must win but it is only the second game.