As the Baltimore Ravens (2-1) take on their rivals the Pittsburgh Steelers (1-1-1) they will be looking to bring home a victory just as they did last week. Here are this weeks five keys to success for the Ravens. 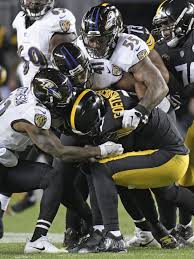 Second thing the Ravens need is defense, as I mentioned in the first key the defense needs to step up and put stops to the offense. The more stops the more time for the Ravens to bring in points the more time the ravens have the better especially if they maximize every drive for some type of points.

Special teams needs to pull plays if the Ravens could get some returns for touchdowns or even just make sure they are 100% for field goals that will help bring home a victory. While making sure field goals are a 100% they also need to be sure they’re punting far enough that it’s inside the Steelers 20 yard line, but not a touch back.

Fifth and final key to success is not having penalties of any kind. Last week the Ravens only had 7-52 in penalties this week of course they need to work for none even though that’s usually not possible if there are penalties they need to be sure its not simple, preventable penalties like delay of game for example or false start.