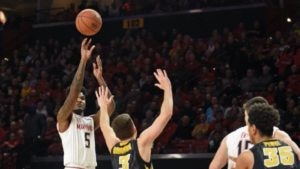 The Terps lost to #6 Michigan State this past Sunday and will look to take down #3 Purdue on the road tonight.  Maryland has struggled in road games and their lack of depth causes the Terrapin starters to become absolutely exhausted by the last 10 minutes of each close game.  Tonight will likely be much of the same story, unless Maryland can play great for all 40 minutes instead of just 30.

Purdue took down the Terps at the XFINITY Center back on December 1st.  Maryland took them down to the wire again, losing 80-75.  Anthony Cowan Jr. dropped 20 and Kevin Huerter added 19 in the game.  The Terps trailed by 14 in the first until closing the gap to 43-37 at the break.  Then the Boilermakers just wore down the Terps.

Maryland’s keys to winning are always the same.  Cowan and Huerter will lead the offense.  Don’t turn it over.  Get rebounds, it’s all the same.  Tonight however, Maryland needs production from their role players and Bruno Fernando.

Fernando has been through a lot this year.  He’s only a freshman, sprained his ankle twice, and suffered through the flu.  Maryland needs the old Bruno back if they want to win this game.  He hasn’t been able to shake off the rust in the low block and it’s clearly visible it’s starting to get in his head.  At the beginning of the year, Bruno would throw down a big dunk or a loud block and go crazy.  The fans then went crazy and the players went crazy.  Fernando has to get going early and get energy back into the Terrapins players.

Darryl Morsell has done a fantastic job replacing Justin Jackson and Ivan Bender.  Morsell, a wing, is averaging 7 boards a game to pace the Terrapins over the past six contests.  Dion Wiley looks to be healthy again and his stroke shows it.  Wiley has the ability to shine out there, but at the same time he sometimes disappears and it looks like it’s five on four for Maryland.  Jared Nickens hit a couple bombs against Michigan State and continues to be in close contested games.  If Maryland can get a combined 30 from Nickens, Bruno and Wiley, they will have a great chance of staying in this game.

Purdue has so many weapons offensively and defensively that there is no doubt that, unless a massive breakdown, they will be a 1 seed in the NCAA Tournament.  Dakota Mathias lit up the Terps for 18, 7-7 from the field, and Isaac Haas led the Boilermakers with 20 back in that win over the Terps.  Carsen Edwards also put in 18.

Overall, Purdue is an excellent ball club.  They don’t have the same athleticism that Michigan State has, but their consistency on both ends of the floor has put them in a great spot.  If Maryland can weather the storm in the first half and first five minutes of the second, it’s going to be another close game.  You almost have to think that Maryland, even with the injuries and youth, will pull one of these games out.  Why shouldn’t it be against #3 Purdue in West Lafayette?

Maryland and Purdue at 8:30 on the BTN.  Terps need this one.