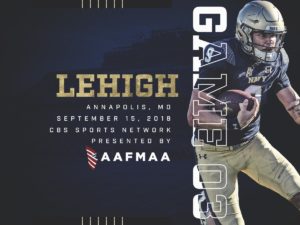 With Navy coming off an impressive win against Memphis, and Lehigh recovering from a disheartening loss to Villanova, Saturday’s game between the FBS and FCS teams has the classic makings for a trap.

The Midshipmen can not overlook the Mountain Hawks, a Patriot League school who is treating this game as their Super Bowl. Danger lurks here.

Let’s take a look at the numbers from last week’s games before diving deeper.

Brad Mayes, a 6’2” senior, lines up under center for Lehigh. This season, Mayes has completed 31 of his 52 passes for 267 yards, one TD and one interception. Last week, Mayes and the offense were kept to just 176 total yards, Lehigh’s lowest total since 2010.

However, it is Dom Bragalone who  defines the Lehigh offense. The star RB left the Villanova game in the second quarter due to a head injury. The senior will not play Saturday against Navy.

Bragalone has 155 yards and three TDs on 36 carries in five quarters of football this season. Five times in his collegiate career, Bragalone has been named the Patriot League Offensive Player of the Week. Bragalone’s 42 career rushing TDs ties the school record.

His absence from the Lehigh offense can not be underestimated.

After faltering mightily against Hawai’i in week one, the Navy defense stepped up impressively against Memphis. Leading the way was senior safety Sean Williams. His nine tackles and two forced fumbles against the Tigers led him to being named the AAC Defensive Player of the Week and the NAAA Athlete of the Week. Williams played a large role in a defense that kept a normally high-powered offense scoreless during last week’s critical fourth quarter.

The four turnovers were crucial in the Midshipmen’s win against Memphis. Such an effort against Lehigh might very well be deciding.

• Mark Walker (senior, LB)… led Lehigh with 11 tackles, including a sack and three tackles for loss against Villanova
• Sam McCloskey (senior, DB)… leads the defense with 15 tackles and three passes broken up this year
• Evan Chadbourne (sophomore, RB)… along with Buskirk, looks to pick up the slack left by Bragalone’s injury
• Jake Buskirk (senior, RB)
• Rashawn Allen (freshman, RB)… starting in Bragalone’s place, he must shine to give Lehigh a fighting chance