Plenty of excitement in The Bears 6-2 loss against Providence

The Hershey Bears hosted the Providence Bruins again at home Saturday night hoping to get a win after their 3-0 loss on Wednesday night. The first period opened up feeling a whole lot like Wednesday’s game as Providence went on a scoring frenzy. Kenny Agostino would score first at 6:19 in the period, followed by Austin Czarnik just over ten minutes later at 16:10 in the first. They wouldn’t end the period before tallying another goal, scored by Jordan Swarz with only fourteen seconds left before intermission. The Bears ended the period with just three shots on goal.

The second period would open up with yet another goal, coming from Adam Payerl to bring Providence ahead 4-0. Less than twenty seconds later the game would turn upside down, as six players on the ice would dish out a total of thirty seven minutes in penalties which would end with goalies Pheonix Copley and Jordan Binnington meeting center ice to drop the masks and gloves in an all out brawl. Copley and Binnington would be ejected from the game, after equally being handed a game misconduct, as Vitek Vanecek saw himself against Zane Mcintyre for the second time this week. Copley and Binnington were the goaltending tandem last season in a Chicago with the wolves before Copley was traded to Hershey. 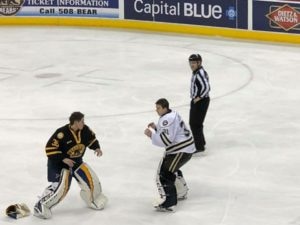 With the crowd fired up and on their feet, the Bears would find their groove, with Riley Barber scoring the first goal at 10:27 in the second period. Zach Sill would get his seventh assist of the season along with Aaron Ness. Liam O’Brien would follow up with his seventh goal of the season at 16:03. Aaron Ness would get another point for the game as he and Travis Boyd get an assist on the goal.

We wouldn’t see much in the third period. Tommy Cross would get his third goal of the season making the game 5-2 and sticking a knife through the hearts of the Bears and their fans. The Bears would pump thirteen shots on net but it wouldn’t be enough. The Bruins would score into the empty net. But upon further review the play was offside and the score would go back to 5-2. Just over a minute later the next goal would count, this time an empty net goal from Providence’s Zach Senyshyn and finish off the Bears in a wild 6-2 game that saw eighty-nine penalty minutes in front of a crowd of 7,822.