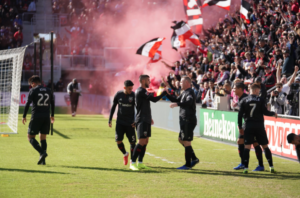 AUDI FIELD – D.C. United did it. After starting the season with just two wins before taking the pitch at their brand new stadium in mid-July, they protected their turf and showed how the newest stadium in soccer may potentially have the best homefield advantage in the MLS. Their 3-1 win over New York City FC punched their ticket into the MLS playoffs before a sellout, standing-room only crowd at Audi Field Sunday afternoon.

“We can exhale, just for a second for 24 hours. There hasn’t been much of that over the last couple months so it feels great,” said D.C. United head coach Ben Olsen.

“It feels great for the guys, for the club, who work here, the ownership, the fans. This city has gotten on board with this team over the last couple months. It’s been fun and I’m glad it’s gonna continue. We’re playing at a high level right now. We have some individuals playing at an exteremely high level and I certainly wouldn’t want to play us. We’ll enjoy this and get back to work to try to get a result against Chicago.”

The win improves D.C. United to 14-11-8 on the season with 50 points. Thanks to a Columbus loss to Orlando, D.C. United leapfrogged past the Crew to sit in the fifth spot in the Eastern Conference by two points, giving them an opportunity to play a knockout round game at home should they defeat Chicago on Sunday.

Wayne Rooney nearly put the home club up 1-0 not even a minute into the game. Ulises Segura quickly fed him the pass and Rooney JUST missed the net on a header. D.C. United kept the pressure early and the effort was rewarded in the eighth minute. As Luciano Acosta came charging toward the net, he quickly dished it to Rooney right on the goal line. This time Rooney would not be denied and it put D.C. United up 1-0 to the delight of the supporter’s sections right behind the net.

The goal was Rooney’s 11th of the season, giving him the team lead for goals on the season. In the 24th minute there was a role reversal. This time it was Rooney to Acosta to put the black and red up 2-0, although Rooney wasn’t credited with the assist. That was Acosta’s 10th goal of the season. For the first time since the 1998 season, D.C. United boasts three 10-goal scorers (Darren Mattocks: 10)

Although Rooney wasn’t credited with the asssit on the stats sheet, it doesn’t overshadow the connection and the chemistry between him and Acosta.

“It shows itself on the field. I’ve said it many times before but he’s a great player, a very easy player to play with, he makes everything easier and makes us better as a team,” said Acosta.

In the 37th minute, Bill Hamid stopped a shot from David Villa to keep the vistors off the board. That save was one of two Hamid made in the first half. At the end of 45 minutes, D.C. headed to the locker room up 2-0. D.C. United outshot NYCFC 7-6 in the first half. Rooney led the way for DCU with four shots, three on target.

Ulises Segura nearly made it 3-0 right out of the gates of the second half in the 48th minute but his attempt was blocked. On the other end, NYCFC was fighting to get on the board. After a foul by Yamil Asad in the 54th minute, Valentin Castellanos shot the ball from the left side of the box but the kick sailed high to the right into the stands.

NYCFC had another chance with a free kick a minute later after a foul by Junior Moreno. David Villa’s attempt was blocked by the stingy United defense.

In the 72nd minute while D.C. United was on the attack, Alexander Ring was whistled for a hand ball in the penalty area. It gave D.C. United a penalty kick opportunity which Rooney converted for his second goal of the game to put them up 3-0.

It was an important insurance goal because in the 78th minute NYCFC got on the board thaks to a goal from David Villa for his 13th of the season. That was as close as they’d come. The goal ended Bill Hamid’s shutout streak which spanned the last two games but he was still brilliant nonetheless with three saves.

“Homefield advantage is huge in this league and if you take advantage of your home matches, you can climb up the table,” Bill Hamid said. “We did that very well. We had a little bit of a hiccup in the beginning with a loss (in late August) to Philadelphia. It was a little bit of an eye-opener but we quickly turned things around, put our best foot forward and we’re in a good position right now.

Now that D.C. United has checked off the box of clinching a spot in the MLS playoffs, there’s no rest for the weary. They would like nothing more than to open the playoffs at Audi Field and they can do that with a win this Sunday over Chicago. Kickoff for that game is at 4:30 p.m.