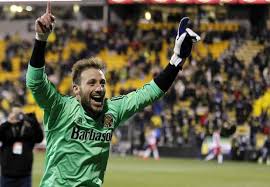 Steve Clark had a fantastic game for D.C United last time out against Columbus Crew Sc. That was his first start of the season and he proved to everyone he has the ability to be the first choice goal keeper. Steve was born in Mason Michigan on April 14th, 1986. Standing at 6 ft. 2 inches he has a good height for a goal keeper.

After finishing college in 2008, Steve Clark was not picked in the MLS Super Draft. A year later he was offered a trial by English side Bradford City but he eventually left due to inability to retain a work permit.

Steve’s professional career started with Norwegian side Honefoss Bk where he won a couple of individual accolades with the club. However, he got his major breakthrough when he signed for Columbus Crew Sc in 2014. He made a century of appearances for them. After a small stint in Denmark for Danish side AC Horsens, steve returned to the USA  to sign for his current team D.C United  in August of 2017.

This weekend, D.C United will be facing Philadelphia Union who are yet to win a game this season at the Talen Energy Stadium in Chester, Pennsylvania. Steve Clark will be hoping to retain his position in goal and hopefully register another clean sheet for the Black and Reds.