Pheonix Copley- The man behind the mask

Pheonix Copley is in his fourth professional hockey season and his second stint with the Hershey Bears. So far this season with the AHL Hershey Bears, Copley has a 15-16-4 record through 39 total games played, and an .897 save percentage. Copley earned a recall this season when Braden Holtby went down to injury. Cops remembers the recall and travel very well “I was supposed to fly out Wednesday but there was a little blizzard, so I flew out Thursday and I went to Detroit, then to Montreal, then New York, then back to Hershey. I was in Hershey getting ready to bus to Bridgeport when I got the recall, so I got off the bus and went to Washington to back up” 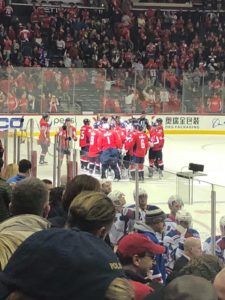 Copley isn’t the rookie any more and has spent time around Braden Holtby, Phillip Grubauer, Vitek Vanecek and multiple others in the Caps organization for most of his career.  Pheonix has spent time in training camp with the St. Louis Blues and the Washington Capitals and both minor league affiliates in Hershey and Chicago. “You want to be in the NHL, both teams have a great group of guys, and everyone gels. The work for a goalie is about the same (whether your in the NHL or AHL)” when asked about the difference in skill in the NHL and AHL.

When asked about how he conducts himself around the rookies and prospects Copley had a few thoughts ” I was watching Grubi in my early years, and I try to show the guys how to be a good pro.” He continues on ” I just try to do the right thing”. You can tell by the way Copley conducts himself on and off the ice that he tries to do the right thing. Even if it means having to get physical with the other goaltender.  “I want my team to know I have their back, I don’t want to let the other goalie get involved.”

As said earlier this is Copley’s second stint in Hershey, and when asked what it was like getting the call about coming back to Hershey, ” I was extremely excited, St. Louis and Chicago were great places to play, but I knew a lot of the team from before, and its a great place to play.” How did Pheonix find out about his recall? ” I was in the apartment playing monopoly with my girlfriend. I missed the call from Mitch Korn the first time, and got the second one, and got a feeling when I saw the call and had a weird feeling that this could be a trade and was excited” 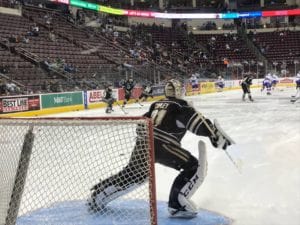 Copley returned to the Bears playing in 25 games including 9 playoff games. Pheonix seemed to have come at the right time for the Bears giving them the spark needed to edge out the Bridgeport Sound Tigers for the final playoff spot. The Bears would go on to defeat the Lehigh-Valley Phantoms in 5 games to move on to the second round the the Calder Cup Playoffs against the Providence Bruins. Copley went 11-5 during the regular season for the Bears in return with a .931 save percentage, along with a .933 save percentage in the playoffs and a 5-4 record with one shut out.

When asked if Copley has any any routines or rituals? ” No, I dont like superstitions, but rituals I make sure my body is ready and mentally I try to stay alert”

Pheonix Copley is looking forward to next season. His contract next year is a one way deal with the Washington Capitals. When asked if there is anything he will do differently knowing what is on the line next season in training camp Copley again seems to give the right answer. “I try to get better every day, I try to prove to the staff where I belong”

Getting the chance to reflect on the four seasons in the pro’s and playing in all three of the top pro leagues (NHL, AHL, and ECHL) and thinking back to the two seasons at Michigan tech, Copley was asked about the difference from the College game to the pro game. “In the pro’s the game and guys are smarter and make the extra move, in college the guys aren’t that game smart yet” The grind of the season was another aspect that in Copley’s mind is difficult. “The pro’s there are 76 games and in college you have 30-40 games if you go all the way.”

What does Copley enjoy doing in free time…Art.  “My first year pro, my room mate and I started with acrylics in our free time. We grab some canvas and have fun.”

Thank you to the Hershey Bears and Pheonix Copley for your time and effort.