Not Time To Worry About The Ravens: Here’s Why 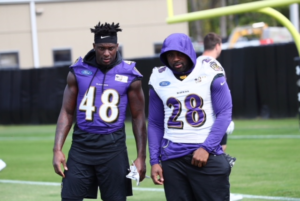 Back to back dominating performances to begin the season had the Ravens looking like a Super Bowl favorite. The following two weeks the Ravens looked like one of the worst teams in the league.

Reasons? A countless number of injuries, leading to terrible offensive line play, resulting in a smokescreen Joe Flacco. The defense is suffering because of the atrocious play by the offense. Being on the field for a combined sixty-nine minutes in the past two games does not spell a recipe for success for a defensive unit.

However, there is no need to push the panic button. The Ravens sit at 2-2 heading into a week five matchup against the Derek Carr-less (maybe, was listed as questionable for Sunday’s game) Oakland Raiders. They are a game back of the division leading Pittsburgh Steelers and a game ahead of the third place Cincinnati Bengals. This is not the greatest position to be in of course but it is also not the worst. I mean we could be the Cleveland Browns.

The AFC has been relatively weak this season. Granted the AFC West has two of the top teams in the league with the Denver Broncos at 3-1 and the Kansas City Chiefs being the only remaining undefeated team left at 4-0. Everywhere else, the division leading team has no more than a game lead over the second place team. Some how the almighty New England Patriots are sitting in second place in the AFC East behind the 3-1 Buffalo Bills, the Jacksonville Jaguars are in a three way tie for first in the AFC South along with the Tennessee Titans and Houston Texans who are all 2-2, and of course the Steelers hold a game lead over the Ravens in the AFC North as mentioned above.

Other than Kansas City there is no clear cut team that looks like they are a sure fire bet for the playoffs. Fifteen teams have shown that they have a glaring weakness or weaknesses and can be exposed greatly. Defenses have not liven up to expectations, same goes for some offenses, quarterback play has not been as good as it could be, and lots and lots of injuries have the AFC looking like a complete toss up.

What does this mean for the Ravens? It means that they are right in the mix of the competition. They have the ability to get things straight and make a run for the post-season starting Sunday. They can do something that only one other AFC team has done. Make. A. Statement. Show that they can be one of the superior teams in the conference. Young players can make a name for themselves and show that they are not going to lay down and be shoved in the cellar of the AFC. They can become the team they said they were going to be. The Ravens can represent Baltimore and do what we do best. Hard work, dedication, blue collared determination. Play TOGETHER. Play RAVENS football.

Plus, it is only a matter of time before Tom Brady gets his super powers back and leads the Patriots to a 14-2 record.