JEJU, South Korea — The new season in golf is upon us, although it already looks like a rerun of the 2017-year. Justin Thomas is in the winners’ circle already after beating Australia’s Marc Leishman on the second playoff hole Sunday to win the inaugural CJ Cup in South Korea.

The PGA’s 2017-18 season started a few weeks ago and the rain of dominance Thomas has had in the 2017 calendar year is still there. After going to two extra holes, Thomas got it done with a birdie on the second of those while Leishman finished with a bogey.

This was the first U.S. PGA Tour regular-season event in South Korea and was it a memorial one. Overnight Thomas shared the lead with Scott Brown bur immediately fell behind when having a double bogey on the 550-yard par-5 No. 3 hole. Then after sailing through the next 13 holes Thomas ended up with a bogey on the 17th that put JT a stroke behind. All of this before coming right back and carding a birdie on the 18th to force a sudden death playoff finishing at 9 under.

The first hole to be replayed was the the par-5 18th, the pair both made par on the first extra hole. Then Leishman tried to reach the par-5 in two the second go around and found the water right before the green. This was all that Thomas needed to slam the door and hoist up the inaugural CJ Cup. 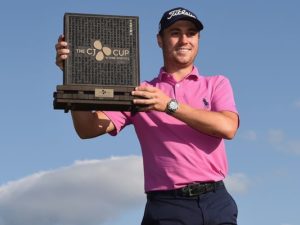 For Thomas this calendar year was a thing of beauty, that in golf we have not seen since the dominance of Tiger Woods. One of those wins was the biggest of Thomas’s career at Quail Hollow for the 99th PGA Tour Championship. After the smoke settled on the 2016-17 season it saw Thomas at the top of the FedEx Cup winning it all.