Online gambling in the USA is something which is clouded by confusion because of the differences between the laws in the various states. Across most of the USA, online gambling is illegal, but it is possible to enjoy a game of roulette online in a select few of the 50 states. With the recent news of sports betting becoming legal in the US, the conversation about online betting is coming up again. In this article, we are going to look at the online casinos operating in the US and where you can join in on the fun. 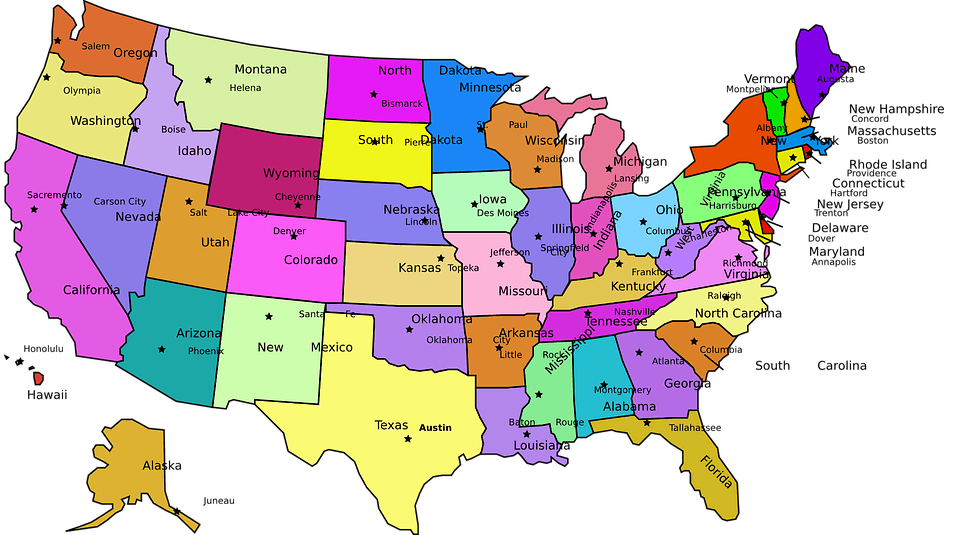 When it comes to online casinos in the USA, there is no law that covers all of the 50 states. Some states tend to follow the Wire Act which is a law that was passed in 1961 and states that online betting is illegal under federal law. There has been some controversy over the legality of the Wire Act however with the US Department of Justice releasing a statement in 2011 stating that wire communications not relating to a sports event cannot be included in the Wire Act. This has meant that various states have been left questioning whether they can use online casinos or not.

Because of the statement in 2011, it has been the case that, when it comes to the law on online gambling, it is up to the individual states to decide whether they would like it to be illegal or not. For this reason, many states are beginning to make online casinos legal whilst others are still very against it. As time goes on, more states are likely to join states like New Jersey, Nevada and Delaware and allow online gambling to take place.

The three main states out of the 50 that allow online casinos and gambling are Delaware, Nevada and New Jersey. These places have seen online gambling take place across their states since 2012 for Delaware and 2013 for Nevada and New Jersey with some being more successful than others. Figures by Newcasinosonline.com USA research show that since legalisation, Delaware saw a decline in online poker by 68% between 2014 and 2015. This did see an increase again but only via an inter-state agreement. This decline may have worried other states into legalising this type of gambling.

In October 2017, Pennsylvania was the fourth state to legalise online casinos for its citizens. This has been seen as a sign that many other states might follow in their footsteps as was expected when the previous three states made the change in the law. Many states like California and Iowa have tried and failed at legalising online gambling in the past. However, states like Massachusetts are expected to follow suit and start offering online casinos for their residents.

With the interstate agreement between Nevada and Delaware, there was hope that there might be better prospects for players. With the legalisation of online casinos in Pennsylvania in October 2017, this state announced that they would join this inter-state poker pool. With the increased number of players now in the pool, it is hoped that the prizes may increase and encourage more people to join in on the online casino movement.

There has been recent speculation that New Jersey might be considering joining on this agreement in time for the World Series of Poker in 2018. This could be very exciting for online poker players and it wouldn’t come as a surprise as New Jersey online casinos have been doing very well recently. In April, they had their second best revenue month ever taking in $23,018,762 in total. Casino sites have seen more popularity with slots and tables having a 12.7% gain year-over-year and poker sites seeing a 10.5% loss.

New Casinos in the US

With the prospect of online gambling becoming legal across more states than it already is, it is not surprising that a lot of online casino websites are being introduced all the time. Great websites like USA Online Casino have partnered with some of the best online casino brands in the US to provide you with the information that you need. This means that you won’t have to worry about a site not being reliable as this site requires casinos to pass a strict criterion before being featured.

There are loads of new casinos on offer for casino fans who are allowed to play in their home state. Make sure to try out Las Vegas USA Casino, Uptown Aces Online Casino and Ruby Slots Casino. All of these sites offer great deals for new players and will allow you to play your favourite casino games from your home or on the go with your mobile phone! Choose from traditional slots to 3D slots and even the classic casino table games like blackjack or roulette. Look out for other popular casinos that are currently available in the UK trying to make their move into US territory to join the likes of 888Casino and Caesars Casino.

Since the time of the Wire Act, betting on sports has been illegal in the US. There has been some leeway over the years as the Professional and Amateur Sports Protection Act (PASPA) that was passed in 1992 meant that some states like Nevada have been allowed to legalize sports betting. This was confined to very few states and so other states have been fighting to legalize this type of betting. This week, the US Supreme court decided to rule in favor of New Jersey who has been trying to get sports betting to be legalized across the 50 states.