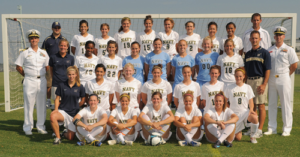 st getting repetitive when I’m writing about the Navy Midshipmen Women’s soccer team.  But I’m definitely not complaining.  As you hear in a McDonald’s commercial, “I’m lovin’ it!”

Saturday afternoon, the Midshipmen (11-3-0; 4-0-0 Patriot League) recorded their seventh victory in a row and posted their fourth consecutive shutout against the Lehigh Mountain Hawks (5-3-4; 1-1-2), as they won 2-0.

In a different start than the previous games, Navy came out of the gate aggressive and didn’t have to wait too long for their first goal.  During the eighth minute, Ash Farrow connected on her seventh goal of the season, giving Navy a 1-0 lead and the only goal they would need for the victory.

GK Sydney Fortson had another easy time for the Midshipmen as she only faced three shots on goal in the entire game.  As I reported previously, she has not allowed a goal since Holy Cross scored their lone goal in the 42nd minute back on September 15th.  That also was the last time Navy has trailed in a game.  When added up in just game time, Fortson has not allowed a goal in more than 409 minutes.

Navy would record it’s second goal in the 81st minute when Eleanor Pratt (with assistance from Meghan Hegarty and Clare Macadam) found the back of the net for her ninth goal of the season.

The Midshipmen will not play again until next Saturday, October 7th, when Boston University (4-5-3; 2-0-1 Patriot League) travel to Annapolis (Game time is 8:00 PM EST).  The way their ladies have been playing, something tells me that I might be writing about their eighth win in a row and fifth consecutive shutout.