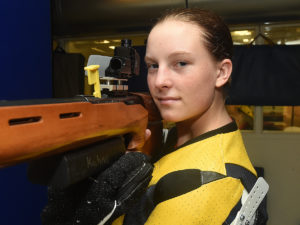 The Navy rifle team rallied from a four-point deficit to beat Akron on Saturday. It was the Midshipmen’s first match in the Great American Rifle Conference this season. 10th-ranked Navy staged their comeback against the 14th-ranked Zips in air rifle to improve their overall record to 2-1.

Despite finding themselves trailing at the end of the smallbore portion by four points, Navy posted a strong score in the round at the Bancroft Hall Rifle Range. Kestrel Kuhne (junior from Everett, PA) and Josh Watson (senior from Enterprise, AL) both shot a 582 for Navy. With scores of 576 and 574, Torrance Kang (sophomore from Columbia, MD) and Daniel Enger (sophomore from Walla Walla, WA) finished out the round for the Mids.

Needing to rally, Navy stepped up in air rifle. Kuhne posted a 592, finishing the day with the best aggregate score of the day for either team with a 1,174. Mark Amdahl (freshman from Albuquerque, NM) and Grabriella Mayes (freshman from Rio Rancho, NM) both shot a 591. Kang finished up the scoring with 588.

In the end, Akron couldn’t match Navy in air rifle. The Zips finished the portion 25-points behind the Midshipmen, securing the match victory for Navy by 21-points.

Navy’s head coach Mike Anti said afterwards, “We had some great performances from our freshman and upperclassmen, while a number of our athletes shot personal best scores.” He then added, “We are looking forward to our first away competitions against Memphis and Ole Miss.”

Navy faces Memphis next Saturday and Ole Miss on Sunday, both GARC competitions.