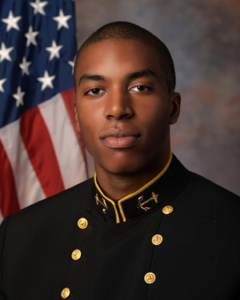 After a junior year which saw Woods catch 46 passes for 1,045 yards and 12 touchdowns, Lev Holly, Woods’ football coach at Blount High, spared no praise for his young wide receiver. “He’s very inquisitive, he studies the game, he works hard in the weight room and class and he’s a leader for us.”

Holly continued, “Collins brings it every day. He’s good in academics… He’s a high-character kid in and out of the community.”

Honored twice as an All-State (AL) wide receiver, he received offers from over a dozen schools including: Duke, Harvard, Columbia, Yale, Troy, Dartmouth and Navy. In early February of 2018, Woods chose the Naval Academy, entering the fall semester as a direct-recruit.

Ivin Jasper, offensive coordinator for the Midshipmen, added, “They have a tremendous upside and that’s always the key.”

Wide receivers’ coach, Mick Yokitis praised Woods as being the fastest of the three plebes but warned he “still has a long way to go.”

The only one of the three freshman who did not attend an academic year at NAPS, Woods hasn’t let that stop him. Yokitis reiterated this past Monday that the young man still has a legitimate shot at making the opening game depth chart.

Although Navy’s season opener is less than a week away (Sept. 1 at Hawaii), no one should count Collins Woods III out of the game.