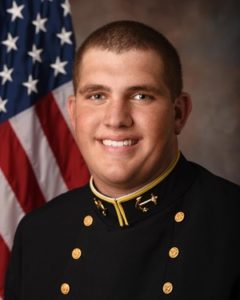 Andrew Wood graduated from Friendship Christian School in 2015 with weighty numbers both on and off the field. A two-sport athlete in high school, Wood earned three letters in basketball and four in football. He saw both Commander teams to state championships.

With an academic record just as impressive as his athletic accomplishments, Wood earned membership in the National Honor Society.

However, Andrew Wood had always wanted to fly. And the Naval Academy offered him the skies.

Choosing to chase his dreams, Wood committed to Navy with his eyes set on becoming a naval aviator after his final collegiate snap.

Andrew Wood made his debut for Navy in the season-opener against Colgate. As a member of the PAT / field goal team, he played in all 13 games his freshman year.

Starting all 14 games, Wood helped Navy’s offense finish 2016 ranked #1 in third down conversion percentage (54.5). Highlights of the campaign included the Midshipmen gaining 500-plus yards of total offense in three consecutive games, in the midst of a seven-game streak of 300-plus yards. Wood went on to earn 2016 CoSIDA (College Sports Information Directors of America) Academic All-District II honors.

Wood repeated the CoSIDA honor his junior year. As starting OT, he was an important part of the offensive line named to the Mid-Season Honor Roll for the Joe Moore Award. After Navy gained 452 yards on the ground against Virginia in the Military Bowl, the line was also added to the Sports Illustrated All-Bowl Team.

Individually, Wood was named to the 2017 Wuerffel Trophy Watch List, an award given to annually to the FBS player who exemplifies community service with athletic and academic achievement.

Andrew Wood joins LT Jake Hawk as the only two returning starters from Navy’s impressive 2017 offensive line. He is a candidate for CoSIDA Academic All-American honors. Wood, carrying a 3.59 GPA, has also returned to the Wuerffel Trophy Watch list.

With experience, size, speed and heart, the Navy Midshipmen will be relying on #61 Andrew Wood to lead their offensive line to another impressive season.