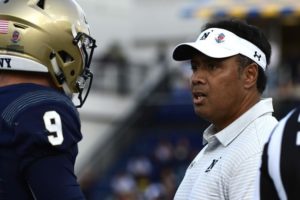 The Navy Midshipmen hung with the Knights of Central Florida but in the end it was not enough.

ANNAPOLIS, Md. — The Navy Midshipmen (5-2, 3-2) kept to their game plan and had seven different players with rushing yards. The game was close but the Midshipmen saw their chances of knocking off nationally ranked University of Central Florida, take a hit when quarterback Zack Abey was knocked out of the game in the third quarter. It was a hit to the head after a nice gain that took Abey out of the game looking dazed and confused.

Before Abey was knocked from the game, he carried 25 times for 126 yards and a touchdown. Those 126 yards added to his now school record of 8 straight games of 100 or more rushing yards. Garret Lewis in backup duty guided the Midshipmen to a 75-yard drive that got his team to within 3 points of the knights with 12:50 left in the fourth quarter.

Navy’s defense came up with a turnover when they intercepted a pass and moved inside the UCF 40. Just a few plays later the Midshipmen’s Darryl Bonner fumbled while receiving a pitch from Lewis.

The Knights cornerback Brandon Moore who placed the hit on Bonner also recovered the loose ball with just over seven minutes remaining. UCF then ran the clock down to 3:30 and Otis Anderson broke into the end zone to put the decisive factor on the game. With the victory, Central Florida (6-0, 4-0 American Athletic Conference) became bowl eligible. This win matched the Knights same win total from last year while also improving the team to 6-0 for the first time in program history.

For Navy this loss (5-2, 3-2 American Athletic Conference) should not come without its positives. The Knights before tonight were averaging 50.6 points per game and winning on a margin of 33.8 points per game. For the Midshipmen this could come as a positive as they hung with the Knights with the loss of their quarterback.

Navy: The Midshipmen are off until Nov. 2, when they face Temple.