Navy Downs Columbia With A Strong Second Half 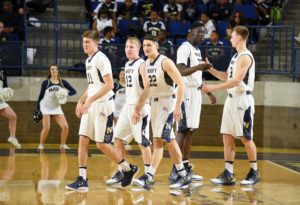 NEW YORK, N.Y. – Navy (9-3) fights back from a 18 point first half deficit to take down Columbia (1-9) on the road in Levien Gymnasium. Shawn Anderson is adding to his great senior season with 21 points and 12 rebounds to notch his first ever double-double.

The Midshipman started off cold falling behind 31-13 with just under 6:44 left in the first half. Nothing was falling for Navy and they could of hung it up right there and quit, but like time and time again they fought back. The Mids outscored Columbia 33-13 over the next 11 minutes to take their first lead of the contest 46-44.

From there on the Navy defense took control and shut down the Columbia offense. The roles reversed quickly and the Mids came out ahead with a 73-68 hard fought win over a struggling Columbia team.

Anderson first career double-double has built on a strong senior season. The senior caption is leading Navy in points (157), rebounds (70), assists (39) and minutes played (374) through the first 12 games.

To go along with Anderson’s career night his teammate Hasan Abdullah finished with 16 points, four rebounds, two assists and one steal. Sophomore center Evan Wieck stepped up also with key buckets late in the second half to notch a career –high of 14 points.