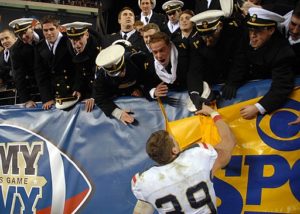 Navy Midshipmen and their fans celebrate.

The Navy Midshipmen beat the Memphis Tigers 22-21 this afternoon in the home opener in Annapolis. Rebounding from a stinging Week One loss to Hawai’i, the Mids controlled the clock and came from behind in the fourth quarter to beat their AAC West foes.

The rain was a constant presence at Navy-Marine Corps Memorial Stadium, but Navy used it to their advantage.

Grinding out yards on the ground, Malcolm Perry took charge of the Navy offense in the second half. Memphis hit Perry hard all game, but the junior QB kept picking up yardage. Perry finished the day with 166 yards rushing and two TD’s on the ground.

Navy’s defense stepped up, especially late in the game, to stop Brady White and the Memphis offense who had taken a fourth quarter lead.

In the end, it was a wholly uplifting win for the Midshipmen. Last year, Memphis’ win against a 5-0 Navy essentially ended a promising season. This year was different.

This year was better.

Navy (1-1) faces the Lehigh Mountain Hawks (1-1) next Saturday in Annapolis.