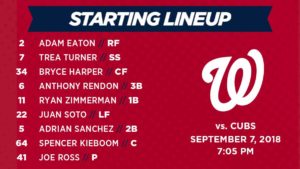 Here’s the Washington Nationals lineup for tonight’s game against the Chicago Cubs.

Joe Ross returns from Tommy John surgery in his first start since July of last year. The Nationals’ right-hander was 5-3 with a 5.01 ERA before going down in 2017. Ross is coming off of six rehab starts where he was 2.1 with a 2.39 ERA.

Jon Lester (15-5, 3.53 ERA) takes the mound for the first place Cubs. While the Chicago ace threw six scoreless innings against Philadelphia in his last start, the Nationals got to the left-hander on August 11th (8 ER, 10 H, 3 2/3 IP).

The Nats again played hard last night. They’ll need to bring the same kind of grit against Lester this evening. Let’s welcome Joe Ross back with a win!