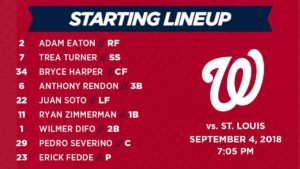 Here’s the Washington Nationals lineup for tonight’s game against the St. Louis Cardinals.

After Bryce Harper led the Nationals back to an exciting come-from-behind win yesterday, Washington gives the ball to Erick Fedde (1-3, 5.79 ERA) for game two. Fedde is coming off two months on the disabled list for right shoulder inflammation. In three rehab starts, he gave up only four runs in 14 2/3 innings.

The Cardinals send Miles Mikolas (13-4, 2.96 ERA) to the mound. In his last start, Mikolas took the loss, his first defeat since June 29.

The Nationals are not ready to give up on the 2018 season. They made that clear yesterday. Nats’ fans, September might indeed be fun.