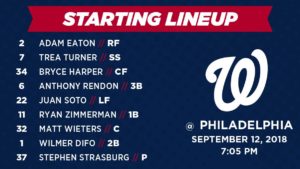 Here’s the Washington Nationals lineup for tonight’s series-finale in Philadelphia.

The Nationals will be going for the sweep of the second-place Phillies. Washington is now only 1 1/2 games behind Philadelphia in the NL East.

Stephen Strasburg (7-7, 4.04 ERA) gets the ball for the Nationals. In his last two starts, Strasburg gave up only four earned runs in his 11 2/3 innings pitched.

Aaron Nola (16-4, 2.29 ERA) takes the mound for the Phillies. The Cy Young Award candidate gave up three runs on three hits in seven innings of action against the Mets.