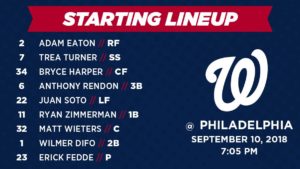 Here’s the Washington Nationals lineup for tonight’s game against the Philadelphia Phillies.

After a rain-soaked weekend at home, the Nationals head to Philadelphia tonight for a three-game series with the second-place Phillies.

Erick Fedde (1-3, 6.00 ERA) gets the start for Washington. In his last outing, Fedde struck out seven in five innings, matching a career high for the right-hander.

Jake Arrieta (10-9, 3.61 ERA) takes the mound for Philadelphia. Arrieta is coming off of a strong start against Miami in which he recorded 11 strikeouts in 7 1/3 innings pitched.