Maryland gets crushed by Ohio State 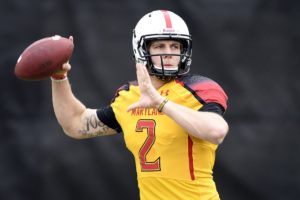 The Maryland Terrapins lost big time to top 10 ranked Ohio State yesterday, 62-14.  The Terps drop to 3-2 on the season and suffer their first Big Ten loss, making them 1-1 in conference.  As the Terps were big underdogs coming into the game, the loss was expected.

The biggest loss the Terps suffered in the game was the loss of yet another quarterback.  Max Bortenschlager, who took over after Kasim Hill, who took over for Tyrell Pigrome, went out for concussion protocol after a very dirty hit.  Before the injury, Bortenschlager was 3-12 for 16 yards,  16 total passing yards.  Enter in junior Caleb Henderson.

Henderson is Maryland’s fourth QB of the year in only the fifth game of the season.  Henderson went 0-1 for his time in the game.  Ohio State was all over the Maryland offense and really pushed the Terrapins on D.  Nothing was working for the Terps, DJ Moore was shut down for 2 receptions for 11 yards, Ty Johnson rushed 12 times for 57 yards.  Johnson did break out with a 100 yard kick off return for a TD early in the game though.  Maryland’s defense was rocked, allowing 62 points.

Terps will now look for Henderson as things just got a lot worse for them.  On the bright side, Bortenschlager most likely suffered a concussion, which at worse will only keep him out for a couple weeks.  Until then, Maryland’s newest quarterback will try to run the Terrapin offense.

Maryland hosts Northwestern next week as they look to bounce back from a blowout.  Kickoff is set for 3:30.