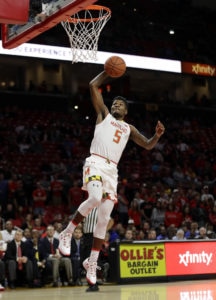 The Terps played their best game of the season, taking down Northwestern, 73-57.  This game kept Maryland’s tournament hopes alive and gave the Terps momentum heading into Nebraska on Tuesday.

Kevin Huerter finished the night with 22 points, scoring 12 in the first five minutes of action.  Anthony Cowan Jr. added 16 points, along with 7 rebounds and 4 assists.  Darryl Morsell showed up big time, almost dropping a double-double with 14 points and 9 boards.

Maryland’s role players had great individual stats as well.  Dion Wiley chipped in 10 points and looked to do most of his damage attacking the rim, rather than pulling a contested three.  Wiley also dropped 5 rebounds and 4 assists.  Michal Cekovsky returned after missing the last three games with a bruised heel as well.  Ceko provided 4 points in 15 minutes off the bench, including a big dunk off a Cowan lob to put an exclamation point on the win.

Bryant McIntosh, who everyone calls the best point guard in the Big Ten, was held scoreless by Cowan and Morsell.  McIntosh finished 0-5 from the field and 0-2 from deep.

Scottie Lindsey was the only player to really get going against Maryland’s defense today.  Lindsey led Northwestern with 20 points and 5 boards.  Even though he had 20, the Terrapins forced Lindsey to go 8-20 from the field.  Lindsey and Dererk Pardon were the only players in double figures.  Pardon finished with 12.

Maryland improves to 14-2 at home this season.  Their home record is the only reason the Terps have any chance at reaching the Big Dance.  Maryland’s road record, 1-7, has killed them though and they must prove that they can actually take down an opponent away from College Park.  The Terps will travel to Lincoln, Nebraska to take on the Cornhuskers on Tuesday, then at Northwestern on February 19th.  If the Terrapins can take down those two, and win out at home, they will find themselves in a good position heading into the Big Ten Tournament at MSG.  One or two wins in the conference tourney could seal the deal for the Terps.