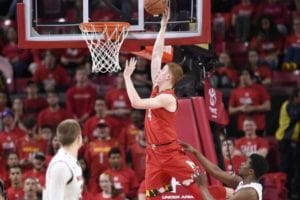 The Terps, (8), take on the Badgers, (9), tomorrow in the Big Ten Tournament.  The winner advances to play the overall number one seed in the conference, Michigan State.

The Terrapins took down Wisconsin, 68-63, in their only meeting of the year.  Anthony Cowan Jr. finished with 23 points and Kevin Huerter put up 19.  Dion Wiley ended the game with a big block on Brad Davison, putting the nail in the coffin.

With the way Maryland came out against #17 Michigan last Saturday, Wisconsin is not an easy win.  In fact, if the Terrapins play like they did in the 85-61 loss, at HOME, on senior night, there is a zero percent chance of beating Wisconsin.  No one played with heart, everyone got beat on defense, no hustle.  It was one the most upsetting games I’ve ever seen from Maryland.

However, these guys give you hope that they can make a deep run in the conference tourney.  Hopefully that loss to Michigan was a fluke, (not the loss but the amount of effort given), and the Terps can bounce back.  The season is all on the line once again.

With all that being said, Maryland has enough talent to shock some people in this tournament.  First of all, it takes place at MSG.  Huerter is from New York, and everyone remembers how much he shined against Syracuse earlier in the season.  Huerter could be one of those players that absolutely takes over and leads his team to victory.  (John Gilchrist).

Anthony Cowan Jr. is going to have to get back on track on the offensive end.  Cowan hasn’t played bad, but he’s not playing with the same intensity and hasn’t been able to get what he wants, when he wants it like earlier in conference play.  Probably because he has to play 40 minutes per game and is exhausted.

Bruno Fernando and Darryl Morsell need to help out Cowan and Huerter.  Fernando has been outstanding over the last five games and was basically the lone bright spot against the Wolverines.  (Him and Reese Mona).  The only problem with Bruno is that he is extremely inconsistent.  Maryland needs 20 and 10 Bruno.  Not 4 and 6 Bruno.  Morsell has been doing everything for the Terps, but hasn’t been as efficient on offense.  He has all the potential in the world to put up 15-20 points per contest, but doesn’t always look for his shot.  Morsell must take over the 3rd or 4th leading scorer for this team.

Dion Wiley has been the biggest surprise for the Terps over the past month.  It’s not the same, stay in the corner and shoot 3’s Dion Wiley.   He gets to the rim, he sets his teammates up for easy baskets, and plays outstanding defense as of late.  Nothing that shows up on the stat line, but it seems like Wiley has had about 8 tipped passes in his hot stretch.  Dion is a key man for not only Maryland’s offense, but on both ends of the floor.

Obviously, it’s easier said than done.  Hopefully everyone can play at their highest level over the next couple days however.  They’ve got the talent.  They just have to win.

March Madness is the greatest time of the year.  The only thing that would make it better is if the Terps are in it.  Maryland vs. Wisconsin at 12pm tomorrow on the BTN.