Marty Mornhinweg Needs To Get The Boot 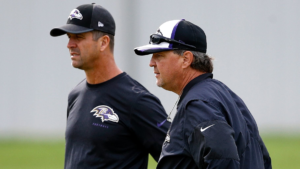 After Sunday’s heartbreaking 27-24 loss to the Chicago Bears in overtime it looks like the offense is running in place. The offensive unit did not score a single touchdown and the only reason the Ravens had a chance to win was because of the special team play and the right leg of kicker Justin Tucker. The special teams unit provided both of Baltimore’s touchdowns, one on a Bobby Rainey ninety-six yard touchdown return on a wild sequence of events and a seventy-seven yard punt return by wide receiver Michael Campanaro.

The punt return eventually led to the game tying, two point conversion. That was the only time the Ravens’ offense saw the end zone. Quarterback Joe Flacco threw two interceptions, neither were his fault in my opinion but that is besides the point. The main reason for the offenses stagnant and inconsistent performances is the game planning and play calling of offensive coordinator Marty Mornhinweg. He seems to throw the ball when we should run and run the ball when we should pass.

Want an example? Just go back and look at the only drive the Ravens had in the overtime period Sunday. Starting on their own forty-six Marty called run plays on both first and second down. He then calls a pass play on third and two. Not having taken a shot downfield all game, wouldn’t this have been the perfect opportunity to strike? A fifteen yard pass play and we are already in Justin Tucker’s field goal range. After that, then you can call a couple run plays, after we already have at least a shot to win the game.

You would think that Marty learned something from the victory in Oakland. He let Flacco take some shots down field and the plays worked. What was the outcome of that game? Even if the plays do not succeed it is the chance that was taken that matters. It shows the defense that they have to respect the fact that they could get burned for a fifty yard pass in a heartbeat. Marty needs to play to Joe’s strengths. Play action rollouts and the deep ball. That is all it takes for this offense to have success. The run game is great and I applaud Senior Offensive Assistant Greg Roman for that result not Mornhinweg. The Ravens offense overall is ranked number 29th in the NFL, sixth in rushing, and thirty-first in passing. Not great balance of success there.

THE RAVENS ARE SUPER BOWL CHAMPIONS!!!!!!!

The fact of the matter is that Joe needs a competent offensive coordinator that allows him to fling the ball fifty yards downfield and open the opposing defense up. Marty is not that guy nor will he be that guy. During today’s presser Head Coach John Harbaugh had this to say about Mornhinweg (Courtesy of Jeff Zrebiec, @jeffzrebiecsun):

Harbaugh: "I think Marty is a great coach. There's no question about it. .I know what he's trying to do. We're in it together."

Until Mornhinweg gets word that he is no longer with the Ravens, fans are going to continue to see an average and inconsistent offense. With that being said the Ravens will have no chance of ending their two year playoff drought. It’s as simple as that.

Sorry for the rant. Just had to get it off of my shoulders. I have to much love for this team to see it underperforming the way it is. Hopefully changes are made and the Ravens get back to their winning traditions.