Kasim Hill Out For Season 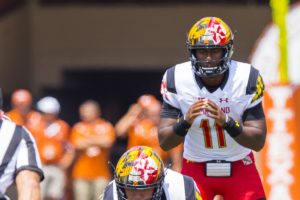 Maryland lost yet another starting quarterback this past game as Kasim Hill suffered a torn ACL and is out for the remainder of the season.  Hill left the game against UCF as the Knights knocked off the Terps 38-10.  Nothing was working for the Terrapins on either end of the field as Maryland only put up 10 points after dropping 63 on Towson and 51 on the road against Top-25 ranked Texas.  DJ Moore was the lone bright spot catching 8 passes on 83 yards and a TD.  That tied Moore for 5th all-time in Maryland history with 13 touchdown catches.  UCF improved to 2-0 and Maryland fell to 2-1 on the young season.  The big issue isn’t the loss, it’s the loss of their starting QB’s.

After Tyrell Pigrome tore his ACL against Texas, Maryland fans were nervous about how Kasim Hill will step in as the Terrapins offensive leader.  Hill shined for the remainder of the Texas game and was outstanding in his first career start hosting Towson.  Now that Hill is gone for the rest of the year, Max Bortenschlager has taken over the reigns.  Bortenschlager went 15/26 for 132 yards, 2 int and a TD.  It was obvious that Bortenschlager was nervous and it showed as he missed on multiple open receivers and was honestly making bad passes at times.

Maryland has dealt with QB issues over the past couple of seasons and they look to keep Bortenschlager as their starter for now.

Maryland gets set to take on Minnesota next Saturday for the first Big Ten Conference game of the year.  Minnesota is 3-0 and a tough first game for the Terrapins to open up Big Ten play.  Kickoff is 12pm.