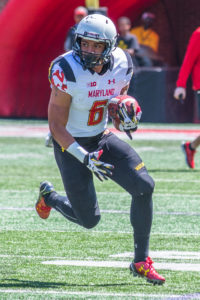 This is Johnson’s second Big Ten weekly honor as he was named Big Ten Offensive Player of the Week back on October 3rd, 2016.  Johnson is the second Terrapin this season to achieve weekly special teams recognition as Antoine Brooks was named co-Special Teams Player of the Week after the win at Texas.

With the quarterback issues Maryland has suffered this season, Ty Johnson has remained consistent and is receiving the proper recognition he deserves as one of the top backs in the Big Ten.  Maryland gets set to take on Northwestern Saturday.  Kickoff is 3:30.