Is Stefon Diggs Becoming A Star? 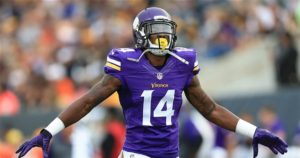 Minnesota Vikings receiver Stefon Diggs started off his season in a big fashion.  Diggs caught 7 receptions for 93 yards and 2 TD’s as the Vikings beat the New Orleans Saints 19-29.  Diggs also rushed once but only for a loss of 6. Diggs caught a lot of attention at the University of Maryland as one of the nations top receivers.  Diggs got enough notice as he was taken in the 5th round, (146 overall) by the Vikings in the 2015 NFL Draft.  In his rookie season, Diggs earned his spot as the starting receiver, next to teammate Mike Wallace in week 7 against the Detroit Lions.  Diggs became the first Vikings rookie to post 80 or more yards in their first three games since Randy Moss in 1998.  Diggs finished his rookie campaign with 52 receptions for 720 yards and 4 scores.  In 2016, Diggs became more of key piece of the offense as Wallace was signed by the Baltimore Ravens.  He increased his receptions by 32, giving him 84 catches on the season.  Diggs posted 903 yards and 3 TD’s.  This season, Diggs has started off hot with the 2 scores in his first game and is already on pace to score more touchdowns than his first two seasons.

Stefon Diggs is becoming an NFL star receiver in only his third professional season.  As SVP would say, “He a Terp”.

Yannick Ngakoue recorded 2 sacks and 2 forced fumbles in the Jaguars historic win over the Texans.

Sean Davis racked up 3 tackles in the Steelers win over the Browns.

Nolan Carroll finished with 4 tackles for the Cowboys in their victory against the Giants.

Long time Raven Torrey Smith made his Eagles debut with a big 30 yard reception from Carson Wentz as Philadelphia beat the Redskins.