Gallagher The Great Or Mini McGregor?

James Gallagher has heard all the comparisons, heard all the whispers of those who are afraid to speak out loud. Analysts to coaches and fighters to fans everyone see’s the similarities to the “Notorious One”. Hell a blind man could see it and all he would need to do is listen to a presser or an interview. So the question always pops up is “The Strabanimal” just a Conor McGregor mini me or is he the real deal? Is he slowly becoming Gallagher the great? 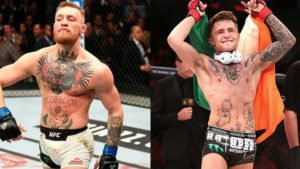 James started training in mixed martial arts at the age of 12. When he was 13 years old John Kavanagh coach of the straight blast gym in Dublin saw Gallagher fight a grown man and knew this kid had the heart of a champion. Now at 22 years old the young fighter already has a wealth of training and fight experience under his belt and hasn’t even hit his physical and mental prime. Gallagher is a deep individual he puts great thought into what he does and how he does it. Gallaghers tattoo’s tell a story on their own. From the name of his parents to the shamrock, lion to a samurai they all have great meaning and purpose. While Gallagher admits to emulating McGregor he is quick to point out he isn’t a Conor clone. 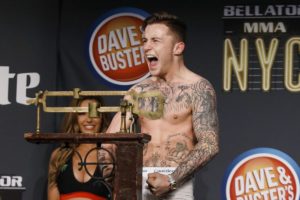 Gallagher trained alongside Conor at the SBG gym in Dublin under Coach Kavanagh. Watching him train and prepare seeing him fight his way to the top of the UFC. Gallagher said that Conor paved the way and he see’s many things about McGregor’s style and actions that he will duplicate. However he also said he has seen some things he shouldn’t do and hence has a better understanding of the right way to cut his path to the top. Gallagher talks the talk for sure but he also walks the walk. “The Strabanimal” does it with a purpose and with show stealing style. Swagger drips off this kid when he walks. Confidence oozes from him in his interviews. Brash and sometimes a bit more colorful than many people like he tells it like it is, or at least like he see’s it. 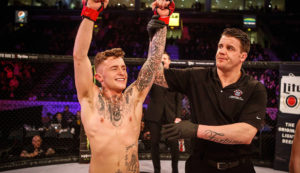 After a quick win last night against Steven Graham with a first round rear naked choke, Gallagher moves to 8-1 as a pro. Submitting 7 of his opponents he has proven to be a beast on the ground. His only loss came at Bellator 204 against Ricky Bandejas who caught Gallagher in the first round and won via knockout. The similarities are certainly there and the comparisons are completely justified between Gallagher and McGregor. Look deeper however and you see a young Irish fighter who is following the man who put the shamrock on the main stage. McGregor may have paved the way but Gallagher is looking to cut his own road through the world of MMA. Jump on the band wagon now and enjoy the wild ride that I promise Gallagher will provide. 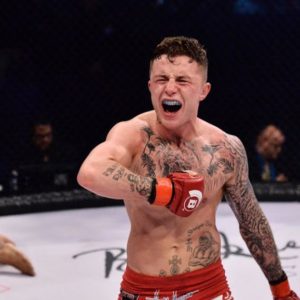 Check out my previous blog on Valerie Loureda