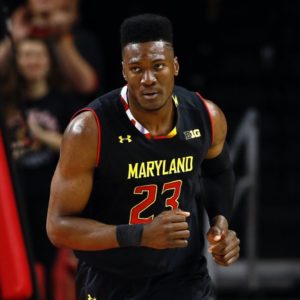 Maryland’s big Bruno Fernando was named Big Ten Freshman of the Week for his performances against Penn State and Iowa.  Fernando put up a double-double against the Nittany Lions and dropped a career-high 21 points against Iowa in last night’s win.  Bruno averaged 15 points, 8 rebounds, and shot 54% from the field over the past three games.

The young stud from Angola is averaging 11 points and 6.5 rebounds this year.  Fernando is also shooting 59% from the field and posts 1.6 blocks per game.  Bruno leads the Terps with 26 total blocks on the season and ranks 6th in the Big Ten in blocks per contest.

Fernando is the second Maryland player to win Big Ten Freshman of the Week this season as Darryl Morsell won the award back on November 20th.