Early Week 12: The Ravens control their own destiny … Again 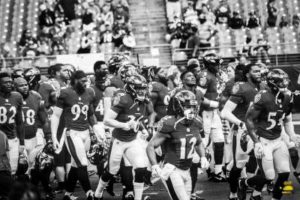 The Ravens are 5-5 heading into week 12 and have full control of their playoff destiny. Sounds familiar?

That was the same exact scenario from last season when the Ravens were headed into a division matchup against the Cincinatti Bengals. The Ravens would win three of their next four before heading into a Christmas day, win or go home match up against the Steelers. I wont go into detail about that game because the very thought of it may cause nausea. But yet again here we are. The Ravens have a much easier remaining schedule on paper than last season with only one opponent currently in the playoffs if they were to start today. Take a wild guess of who that opponent is….that’s right the Pittsburgh Steelers in a week 14 night game in Pittsburgh. While that for sure will be a big game, the Ravens have been in this situation too many times to know they can not look three games ahead. The first thing is to take care of business at home on Monday night against the Texans.

It’s the second week in a row the Ravens are playing a team who has lost their starting quarterback to injury. The Texans won last week against the Cardinals but mostly behind the performance of their running back Donta Foreman, who tore his achillies late in the fourth quarter. Once again everything is looking favorable for the Ravens and they will have to play wit the same tenacity they did last week against the Packers. The Texans have enough weapons to pull off a upset if the Ravens let them hang around for too long.

I have the Ravens pulling this one out 20-10 behind another strong game from the defense. Two interceptions for Eric Weddle and 2 sacks for T-Sizzle.